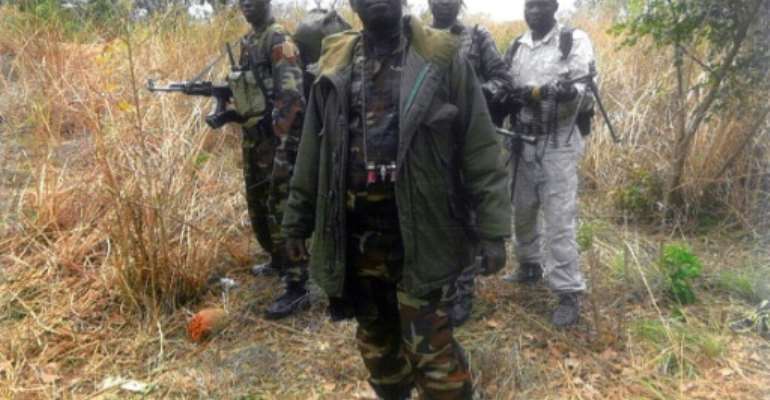 File picture of Abdoulaye Miskine with members of his armed group. The photo, which is undated, was published in April 2013. By - (FDPC/AFP/File)

A veteran leader of one of the militias that control most of the Central Africa Republic (CAR) has been arrested in neighbouring Chad, the CAR government said Wednesday.

Abdoulaye Miskine, leader and founder of an armed group called the Democratic Front of the Central African People (FDPC), "has been arrested in Chad. We are seeking his extradition," spokesman Ange Maxime Kazagui told the press.

In the Chadian capital N'Djamena, a senior Chadian security official, speaking on condition of anonymity, said Miskine had been arrested at Harare Mangueigne on the Chad-CAR border.

"He was taken to Ndjamena, where he was immediately placed in custody at the National Security Agency," Chad's counter-espionage service, the official said.

"We haven't yet received any instructions as to a possible extradition."

One of the world's poorest countries, the landlocked CAR has been mired in conflict for years.

Most of the country is in the hands of armed groups that typically claim to represent religious or ethnic communities, and often fight each over of the country's rich mineral resources.

Miskine set up the FDPC in 2004, when the country first plunged into civil war, and gave himself the rank of general.

He joined the coalition of mainly Muslim militias that in 2013 overthrew then-president FranÃ§ois Bozize -- a revolt that sparked French military intervention and the holding of elections for a successor.

In February this year, Miskine signed a peace agreement in Khartoum between CAR President Faustin-Archange Touadera and the heads of 14 armed groups.

Under the deal, militia chiefs were given senior government positions in the purported aim of helping to cement peace.

Miskine was named advisor to the new government but "never took up his position," Kazagui said on Wednesday.

The intensity of violence has dropped in CAR since the Khartoum accord, but fighting between rebel groups continues and toll among civilians is still rising. More than a quarter of the 4.7 million population have fled their homes.