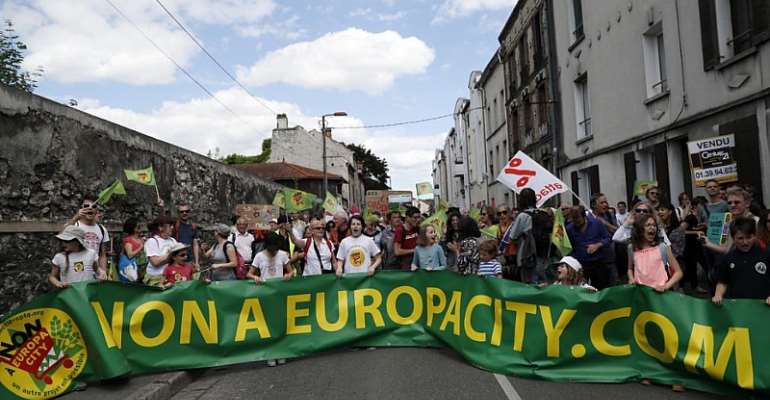 President Emmanuel Macron has withdrawn support for the Europacity shopping and leisure complex in suburban Paris, deeming the project "outdated" and "old-fashioned".

The €3.1 billion euro complex - with a theme park, cultural venues, hotels and shops - would have covered some 80 hectares, making it the largest development project since Disneyland Paris opened in 1992.

Supporters viewed it as a tool for economic development and were looking forward to the creation of 10,000 jobs in a poor area with high unemployment.

But for its increasing number of critics, it was “huge, useless and damaging”, handing over hectares of “the most fertile land" in the Paris suburban to urbanisation in the name of consumerism.

An outdated project Confirming reports in the daily Le Monde, the Elysée Palace announced on Thursday that Macron now considers the EuropaCity project “outdated and old-fashioned”.

It said he was considering an “alternative project larger than the Gonesse triangle”, the area along the route from the Charles de Gaulle airport into Paris centre where EuropaCity was to be located.

"The President of the Republic has decided not to pursue the Europacity project," the Elysée told AFP news agency. The head of the French state considers that it no longer "corresponds to the aspirations of our fellow citizens."

Boosting Macron's green credentials The announcement came just ahead of Thursday's third Ecological Defence Council: a body set up to review any project that may involve funding by the French state.

At its first meeting in May, the executive announced it was withdrawing support for the Montagne d'or gold mining project in the rainforests of French Guiana, vehemently opposed by environmental groups.

In January 2018 the French governent also dropped plans to build a new regional airport in Notre Dame des Landes near Nantes, after years of protests claiming it was too big, expensive and damaging to the environment.

Opponents to EuropaCity, whether environmental organisations or traders' association had challenged the project before the courts on several occasions. Some were successful and slowed down its implementation.

Macron favours a “more mixed, more modern” alternative to EuropaCity, which would not create an “excessive pole of consumption, leisure and objects,” the Elysée Palace said in its announcement.

'Years of struggle rewarded' Ecologists, left-wing MPs and members of the majority welcomed the announcement.

"This project was absurd in this period of ecological transition and we must now ensure the preservation of these agricultural lands, which have become so rare near Paris," he said.

"Finally, years of struggle, resistance, mobilisation and, above all, pedagogy and another alternative farming project are being rewarded!", EELV leader Yannick Jadot wrote on Twitter.

But EuropaCity expressed its dismay, describing the government's decision as "incoherent" in view of its desire to attract investment.

"An even more incoherent decision given that the State has contributed heavily to make the project more ecological [...] carbon neutral by 2027 and recreating biodiversity" it tweeted.

Uncertain future for jobs The Europacity project was led by Ceetrus, the property owner with the Auchan group, and the Chinese conglomerate Wanda.

A 2016 study by the National Commission for Public Debate (CNDP) estimated that more than 10,000 jobs would be created during the initial exploitation phase, followed by more than 3,000 per year during the construction of the megacomplex.

Macron has entrusted the mission of identifying a replacement project to Francis Rol-Tanguy, former director of the Parisian Urban Planning Workshop, working alongside other elected officials.

It has given no indication how many jobs an alternative project might create.