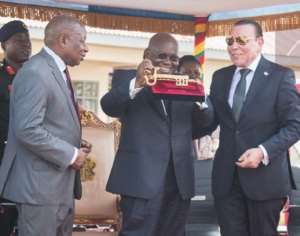 The hospital which is worth $41 million is the second out of nine completed health facilities under the Ghana Hospitals Project started in 2008.

Speaking at the commissioning, President Akufo-Addo said "This edifice has been put up at great cost to our nation, and we should be in the position, some 10 years down the lane, to see it still in good condition. It should not fall in the ways in which some institutions like this in Ghana have gone"

President Akufo-Addo challenged the leadership of the facility to set an example for periodic and constant maintenance.

He assured that government will at all cost work to improve access to quality health services through the provision of logistics which will ensure the attainment of universal health coverage.

The President further mentioned that the National Health Insurance Scheme (NHIS) which was abandoned has been revived.

“We have cleared the GH¢1.2 billion arrears we inherited and brought the operations of the NHIS back to life. We have also launched a mobile renewal of NHIS membership policy,” he noted.

President Akufo-Addo disclosed that his government had taken delivery of the first batch of 96 ambulances, which forms part of the promise of providing an ambulance each for the 275 constituencies in the country.

He was confident that the rest would be delivered by the end of December, this year.

President Akufo-Addo revealed that the delivering essential medical health products through the use of drones has seen significant boost as over 5000 products have been delivered via 1000 within the past five months.

The Minister of Health, Kwaku Agyeman-Manu, stated that as part of achieving the universal health coverage, the NPP government is bent on completing the various hospital projects promised by the President.

"The 750-bed maternity and children’s block at the Komfo Anokye Teaching Hospital (KATH) in Kumasi, which was been abandoned for decades is seeing a facelift," he stated.

Mr Agyeman-Manu pleaded with the Ministry of Roads to work on the dusty road since that contributes to the numerous health issues.

Chairman of the Euroget Group, Mr Said Deraz promised to complete other projects assigned to his company.

"I am grateful to the government, the Ministry of Health and the Ghana Health Service (GHS) for their support in the successful completion of the project, including that of Wa in the Upper West Region in August this year," he intimated.

The Ga East Municipal Hospital sits on a 135,000 square-metre land and is expected to serve communities as Kwabenya, Madina, Achimota, Dome, Adentan, Ashongman, Pantang and Abokobi among others.

Other units in the edifice include orthopedics and reproductive health, a physiotherapy unit, and an administration block.

The hospital was also blessed with modern laboratory, an X-ray Unit, C-T Scans, radiology and other advanced diagnostics, among other facilities.

As the hospital, a three-storey 20-unit staff bungalow, and a parking space for 148 cars on a tarred surface with 1.5 kilometres of internal road network was also constructed.

The hospital was constructed by Euroget De-Invest, an Egyptian construction firm.