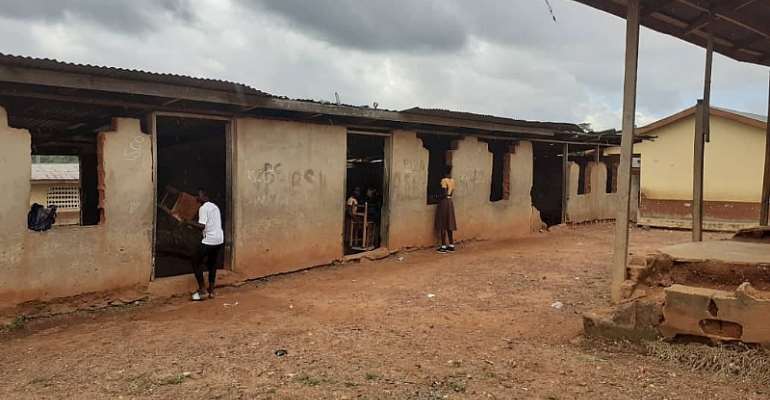 Students at Betinko, a community in the Atwima Mponua constituency of the Ashanti region are calling on the authorities to aid them renovate their classroom blocks that has become a death trap waiting to consume lives.

The Betinko Primary school is in deplorable state with breaking walls, whiles the roofing is ripped off with some hanging.

The situation has compelled teachers to turn away students from school whenever it begins to rain or cloudy.

The deteriorated and eroded blocks, exposing students to direct sunshine is hindering effective teaching and learning.

ModernGhana reporter visit to the school reveals that the upper primary school lacks teaching equipment and materials such as chairs, textbooks, chalks among others.

Speaking in an interview with the Assemblymember of the area Hon. Hon. Martin Prempeh, he said the community contributed to constructed a three classroom block but abandoned the project after digging the foundation due to lack of funds.

According to him, efforts to engage government officials for help proves futile.

He added that Betinko and its surrounding communities such as Nkrumah, Pakyi and other four communities lack toilet facility. "All the toilets in the towns are in a deplorable state and its very dangerous to us when it is rain."

He therefore appealed to government for ultra modern toilet in these communities.

The Chief of Betinko, Nana Kwaku Duah II, said the community lack portable drinking water indicating that residents are compelled to fetch from the stream which is contaminated with faecal matter of both animals and humans.

Nana Kwaku Duah II added that Hon Williams Darko DCE for Atwima Mponua promised to donate bags of cement and other building materials to start the school project but he has not fulfilled his promise yet.

He appeals to DCE to turn back to Betinko else they will not vote in the upcoming 2020 election.