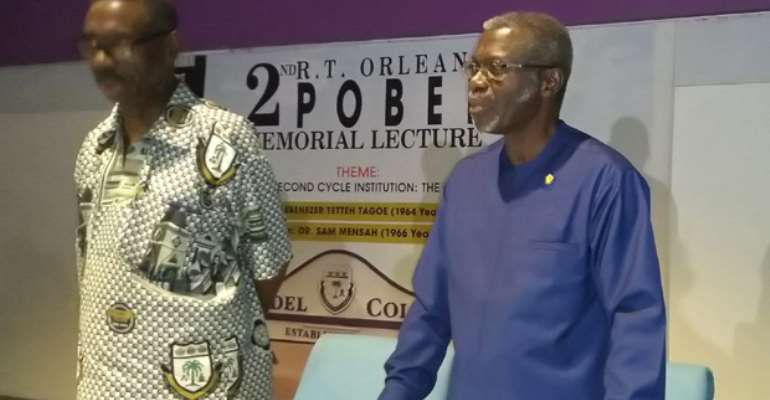 Alumni of Senior High Schools in the country have been encouraged to spearhead the mandatory establishment of endowment funds for the purpose of supplementing government financing of schools through philanthropy support.

A Chartered Accountant and a member of the 1964 year group of Adisadel College, Ebenezer Tetteh Tagoe, who gave the suggestion was of the view that such funds if regularly contributed to, would go a long way to improve academic excellence and boost extracurricular activities in second cycle institutions.

“Small amounts of money from growth-oriented endowment funds will go a long way towards providing and replenishing inexpensive but academically important laboratory materials and equipment,” he said.

Mr Tagoe was speaking in Accra on Tuesday at the Second R.T. Orleans-Pobee Memorial Lecture which was based on the topic, “Sustaining a Vibrant Second Cycle Institution: The Role of Stakeholders”.

He appealed to government to work at creating stable educational environment and predictable policies which has over the years been known to undergo many reforms.

Creating a predictable environment, he said would help other stakeholders make long term plans in executing their respective roles of sustaining a relevant and vibrant second cycle schools.

He also emphasised the need for government “to allow faculty led by the Headmaster to innovate and be creative within the confine of established national legal limits as well as academic and administrative freedom”.

Mr Tagoe encouraged the church as founders of most prestigious schools in the country to not relent on their moral and financial contributions to the institutions.

As was the case with Adisadel College that had 10 out of 14 of its headmasters to be Masters degree holders, a lot more attention he said, was needed in selecting headmasters who will lead second cycle schools.

“The Driver or Prime Mover' of the institution, is the headmaster, who is at once Chief Academic Officer and Chief Administrator,” he said.

He also talked about the need for a seamless collaboration based on mutual respect and trust among stakeholders in order to address issues encountered by institutions.