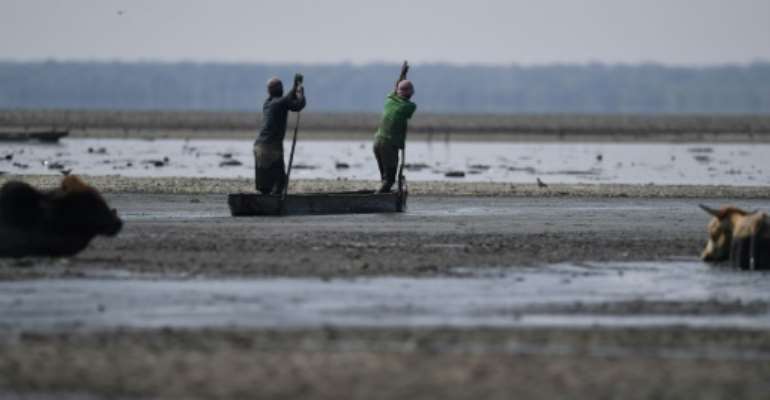 Scientists believe early humans lived in the wetlands south of the Zambezi river for 70,000 years before climate change allowed them to expand. By MONIRUL BHUIYAN (AFP/File)

Modern humans emerged 200,000 years ago in a region of northern Botswana, scientists claimed Monday, in what appeared to be the most precise location of mankind's "ancestral homeland" yet discovered.

While it has long been known anatomically modern humans -- homo sapiens sapiens -- originated in Africa, scientists have until now been unable to pinpoint the precise location of our species' birthplace.

An international team of researchers took DNA samples from 200 Khoesan people, an ethnic group known to carry a high proportion of a branch of DNA known as L0, living in modern day South Africa and Namibia.

They then combined the DNA samples with geographic distribution, archeological and climate change data to come up with a genomic timeline that suggested a sustained lineage of L0 stretching back 200,000 years in the region south of the Zambezi River in Botswana.

Their work created a kind of genetic map tracing L0 lineage to show that prehistoric humans lived in the region for around 70,000 years, before climatic events forced them to begin dispersing throughout the world roughly 130,000 years ago.

"We've known for a long time that modern humans originated in Africa roughly 200,000 years ago," said Vanessa Hayes, from the Garvan Institute of Medical Research and University of Sydney.

"But what we hadn't known until the study was where exactly this homeland was."

The area identified in the study was called Makgadikgadi-Okavango, once home to a massive lake, roughly twice the area of modern-day Lake Victoria.

It is largely desert today.

Around 200,000 years ago, tectonic activity caused the lake to begin to break up, creating a vast wetland that researchers say was home to not only the first anatomically modern humans but also to mega fauna such as giraffes and lions.

But by the time 70,000 years had passed, the first genetic split occurs when a subset of the population migrated north east.

Another 20,000 years on, another group travelled south, according to the genomic map compiled in the study, which appeared in the journal Nature.

"Every time a new migration occurs, that migration event is recorded in our DNA as a time stamp," Hayes told AFP.

"Over time our DNA naturally changes, it's the clock of our history."

'Tips of the human tree'

Map of southern Africa showing the origins of the earliest modern humans in the Makgadikgadi-Okavango paelo-wetland and subsequent population dispersal to the northeast and southwest Botswana science genetics origin. By Gillian HANDYSIDE (AFP)

According to Axel Timmermann, from the Center for Climate Physics at the Institute of Basic Science in Busan, South Korea, these earliest migrations were driven by a very modern human obsession: climate change.

"Comparing the climatic data with timelines of genetic divergences we found a striking pattern," said Timmermann, a study co-author.

"More rainfall around 130,000 years ago, northeast of the homeland, created a green corridor for migration for the first group."

Although there have been humanoid fossil remains believed to pre-date the 200,000-year benchmark named in the study, the team says their study of L0 data allows us to trace our lineage directly back to the region south of the Zambezi river.

"Everyone walking around today... it does actually come back to L0 being the oldest, and it all comes back to this one (region)."

The team said they wanted to collect more DNA samples to help refine their methods and better reconstruct the history of the first movements of our earliest ancestors.

"It's like looking at a big tree," Hayes said. "European and Asians are just tiny little branches of the tip of the human tree."