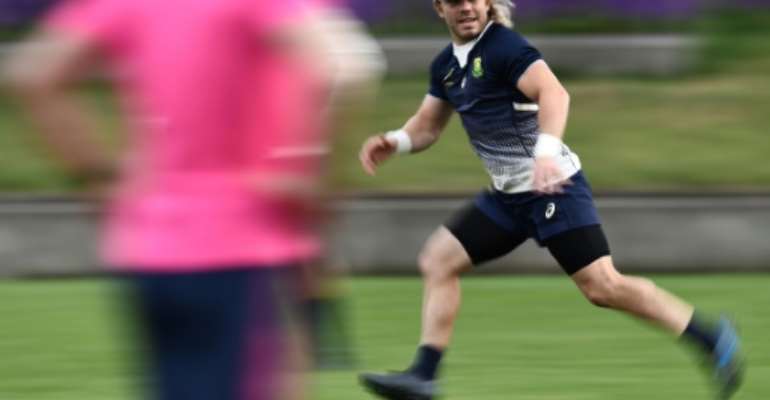 Wales and South Africa clash on Sunday in a blockbuster World Cup semi-final between the Six Nations champions and Rugby Championship title-holders.

Here are three of the key battles that will decide who reaches the final on November 2:

De Klerk has been one of the stand-out players at this World Cup, his shock of blond hair and diminutive stature setting him apart in a game of giants.

Gareth Davies is a supreme try-poacher for Wales. By CHRISTOPHE SIMON (AFP)

He is the player every team would want: a combative, livewire presence who corals his towering forwards, also offering a precise kicking game and service on a platter to fly-half Handre Pollard.

Davies has proven himself as poacher supreme, one intercept off Will Genia leading to a crucial try in the pool victory over Australia.

"He has scored a few tries from intercepts," de Klerk says of Davies. "He is more there to disrupt the attack and get in between the nine and the first forwards, or nine and 10 in the second pod.

"We are aware of it, and we know he does it very well -- he's got great speed off the line. We are going to have to be awake on that."

As the Prince of Wales told the Welsh players when he visited them at training this week, the Springboks are "bloody big buggers".

The lock pairing of Eben Etzebeth and Lood de Jager form a prime example of that, more than filling the enforcer role so long held by the likes of Victor Matfield and Bakkies Botha.

Etzebeth might facing charges of racial abuse, but that has not stopped him performing in Japan, the lynchpin of a Bok pack that will undoubtedly go toe-to-toe with Wales.

Jones will be at the heart of Welsh efforts to undermine the devastating South African rolling maul, dominant lineout and midfield ball-carrying by the forwards.

"They've gone back to their strengths," Wales coach Warren Gatland says of South Africa. "And their strengths are definitely that physicality up front with driving lineouts and a strong scrum and ball-carrying and beating teams far side."

De Jager adds: "It's been a big focus, and against Wales, there will be a massive focus on the lineout, maul and scrum.

"The team that wins that battle will most likely come away with the win on Sunday. We are going to put a big emphasis on the set piece for this game."

Flanker Tipuric is at the heart of Wales' blitz defence, a proven scavenger who is strong over the ball.

Flanker Justin Tipuric is at the heart of Wales's defensive strategy. By CHRISTOPHE SIMON (AFP)

He has formed a sterling relationship with Aaron Wainwright, with Ross Moriarty at number eight, and that back row will have to be at their very best come Sunday.

Du Toit is a rangy, solid player who is key for the Boks in the breakdown battle as de Klerk and Pollard look to set South Africa's outside backs free.

Both Tipuric and Du Toit are effective lineout jumpers and will have crucial roles to play in the battle for set-piece dominance.