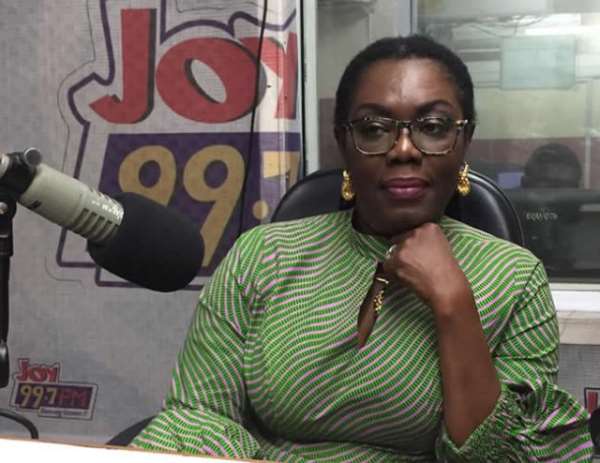 Communications Minister Ursula Owusu has insisted she was not abusive in her letter to a former government appointee in which she declined to take ‘moral lessons from a brothel.’

It rather betrays Ato Cassiel Forson’s lack of understanding of English idiomatic expressions, she has said on Joy FM’s Super Morning Show, Thursday.

The tough-talking minister and the soft-spoken former deputy Finance minister Ato Forson clashed over the government’s implementation of a 9% Communication Service Tax (CST).

Ato Forson in a letter believes it is illegal for the minister to be writing letters to telcos directing how the tax should be collected.

Ursula Owusu wrote back insisting the CST law was on her ministry’s side and invited Mr Forson, who is also the opposition National Democratic Congress (NDC) MP for Ajumako-Enyan-Esiam constituency, to test his position in court.

But it is her comment not to take moral lessons from a brothel that sent the letter viral on social media.

The NDC MP responded with a Bible verse on civil speech. He said he declines to join Ursula Owusu in her brothel.

NDC MP for Ajumako-Enyan-Esiam constituency in the Central region

Taking the opportunity on the Joy FM Super Morning Show, the Communications Minister said the MP who has complained about her abusive letter has taken her idiomatic express literally.

“I don’t see what is abusive about it” she maintained. Lecturing on the meaning of idioms, she said Ghanaian languages have a rich repertoire of phrases that are not meant to be taken literally.

The English expression she used was to make the point that the NDC MP does not have the capacity to advise her on work.

Her letter to Ato Forson is not the only one to have courted her controversy in the past seven days. At an NPP rally, the Communications Minister who is also NPP MP for Ablekuma West said in Twi to wit, ‘those who fail to see any good work done by the Akufo-Addo administration must be witches.’

Ursula Owusu defended her comment and corrected reports suggesting that all critics of the government are witches.

The Communications minister thanked God for her English teacher for exposing her to the richness of the English language which appears to raffle those for have not-so-rich a repertoire.