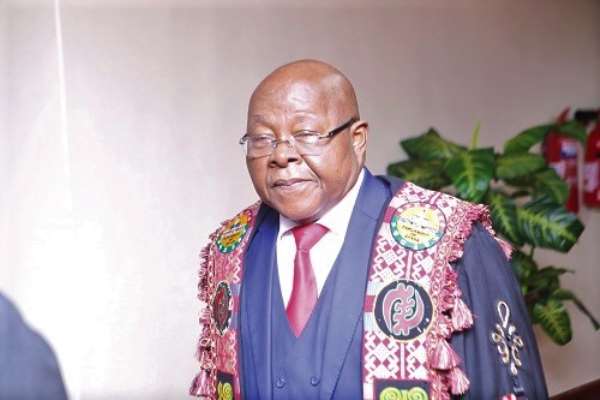 He said such a place should be decent enough for lactating legislators and staff to conveniently breastfeed their babies to enable them to respectively focus on their legislative and administrative functions.

In line with the directive, the Speaker also asked two Members of Parliament (MPs) with medical background, the MP for Ledzokuku, Dr Bernard Oko Boye, and the MP for Klottey-Korle, Dr Zanetor Agyeman-Rawlings, to oversee the creation of the dedicated room.

“I will request once more Honourable Agyeman-Rawlings and Dr Oko Boye, who have been very helpful in these matters, to also take this upon themselves and take the two officers, the Clerk and the Development Officer, to task, so that we have this matter done immediately,” he said.

Breast Cancer Month
Addressing Parliament in Accra yesterday after statements on breast cancer from both sides of the House, in commemoration of the Breast Cancer Awareness Month, Prof. Oquaye said there was a connection between breastfeeding and the challenges some nursing MPs faced in caring for their babies while carrying out their parliamentary duties.

“At least it will be an example of Parliament’s support for women.

It will be a real exhibition of our regard for and commitment to women’s rights in these circumstances,” he added.

Highlight
The Speaker gave the directive after the Deputy Majority Leader and Dr Oko Boye had highlighted the causes, symptoms and effects of breast cancer on some Ghanaian women and men.

Prof. Oquaye acknowledged Dr Agyeman-Rawlings for first suggesting the need for the creation of a room for nursing MPs and urged the acting Clark to take up the directive, saying:

“The ball is in your court and I expect the result in a few weeks.”

Commending the Speaker for the directive, the Minority Leader, Mr Haruna Iddrisu, appealed to him to direct Dr Oko Boye and Dr Agyeman-Rawlings to, in addition to the task assigned them, also make available to the House a paper on palliative care.

He told the House that he coincidentally bumped into two Ghanaian doctors on his recent trip to Rwanda who expressed frustration over the lack of policy on palliative health care in Ghana.

“Mr Speaker, from the statistics that we have, there are about 458,000 deaths arising out of it, while there are 268,000 deaths in middle-income countries, with no sufficient knowledge on its causes,” Mr Iddrisu said.

Appreciation
The Deputy Majority Leader, Ms Sarah Adwoa Safo, also expressed appreciation to the Speaker for initiating what she described as a “proactive bold step” to ensure that provisions were made for nursing MPs and staff of Parliament.

“This will go into history, which can never be told without mentioning that you gave this proactive directive,” she said, and pledged to work with Dr Oko Boye and Dr Agyeman-Rawlings to ensure the realisation of the directive.

Ms Safo, however, pleaded with the Speaker to also consider female washrooms with specialised spaces dedicated for changing babies’ diapers.

She had earlier told the House that breast cancer being the most common cancer in women worldwide, there were about 1.38 million new cases and 458 million deaths from it each year.

Ms Safo added that 70 per cent of diagnosed breast cancer in Ghana were in advanced stages, while 35 per cent of victims were below 35 years.

She said currently the National Health Insurance Scheme only covered the cost of chemotherapy for cancer patients but did not cover breast reconstruction surgery and recommended that the government extend the coverage of same.

Response
Responding to the concerns, the Minister of Health, Mr Kwaku Agyeman-Manu, said statistics indicated that non-communicable diseases had now grown to become the lead killer, overtaking malaria, in Ghana.

He said although the incidence of breast cancer had increased astronomically, early detection was the necessary antidote to solve the problem.

“We, therefore, need to find ways to expose our women and give them facilities that will encourage them to go for frequent testing and screening,” he added.