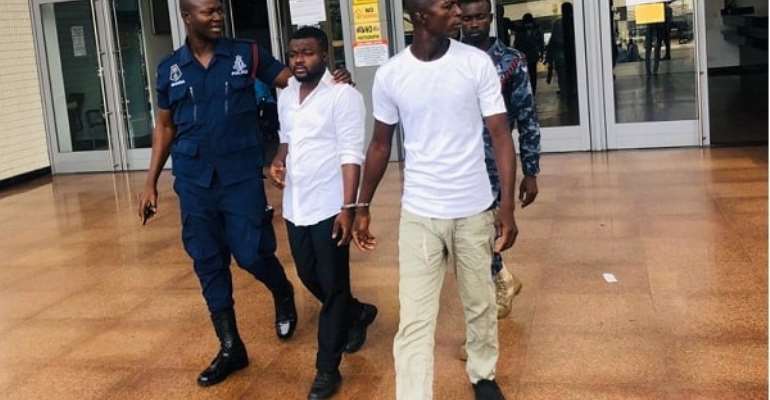 Samuel Udeotuk-Wills, the prime suspect in the kidnap and murder of the three girls in Takoradi, has been charged with human trafficking in another case.

Udeotuk-Wills and five others are alleged to be part of a syndicate that kidnapped ladies, forced them into prostitution and profited from the act.

The other alleged members of the gang are Robert Nana Kwame Hayford, aka Fire; Nii Oblitey Commey, aka Awudome; Chief Bello, Clara Kissi and one Budu.

Their pleas were not taken and they were remanded to assist with investigations.

The court, presided over by Justice George Buadi, remanded them into the custody of the Bureau of National Investigations (BNI).

Hearing continues on November 5, 2019.
Udeotuk-Wills, who is currently serving a 36-month jail term for escaping from police custody in relation to the Takoradi kidnap case, was not arraigned yesterday, while Bello, Kissi and Budu are on the run.

Forced prostitution
Presenting the facts of the case, the prosecutor, Ms Lily Atutigah, an Assistant State Attorney, informed the court that the syndicate operated by luring women to a house in Tema, where they were harboured, prevented from leaving and forced to sleep with men.

She said in July 2016, Kissi lured the complainant (name withheld) in the case and two other women to the place at Tema Community 9. Kissi, Budu and two other men then transported the women to Chief Bello’s house.

The victim, she said, was kept in the house for eight months and forced to sleep with different men, while Chief Bello took the money that the men paid.

According to the prosecutor, one day, Commey went to the house and called the victim to meet Budu, after which Budu forced her to sleep with a heavily built man.

She said during the ordeal, Chief Bello instructed the other members of the syndicate to subject the woman to some forms of inhuman treatment.

“Hayford was given a long-crafted artificial penis to insert into her vagina,” the prosecutor added.

With regard to Udeotuk-Wills, she said, he raped the victim whenever she refused to sleep with a man who went to the house for sex.

Escape
The prosecutor said with a plan to escape, the victim started trading sexual favours with Budu to gain his trust, based on which Budu allowed her to follow him whenever he went to the market.

Ms Atutigah said the victim escaped on one of such visits to the market and reported the matter to the police.

She was then sent to the Police Hospital, where it was discovered that she was two months’ pregnant.

The prosecutor revealed that the victim had since given birth to twins.

Anger over BNI action
One highlight of the case yesterday was the failure of the BNI to produce the accused persons before court within 48 hours of their arrest, as stipulated in Article 14 Clause 3 (b) of the 1992 Constitution.

The prosecutor informed the court that the accused persons had been arrested on October 11 but the BNI had informed the Attorney- General’s Department only last Monday.

She blamed the delay in bringing the accused to court on bureaucracy at the BNI.

The explanation did not go down well with Justice Buadi, who asked why the BNI would flout such a fundamental and crucial constitutional provision on the basis of bureaucracy.

The judge invited two BNI officials in the courtroom and asked them why their outfit refused to produce the accused in court within the stipulated 48 hours.

The officials apologised and said they would inform their superiors about the court’s disapproval.

“Are you telling me that your supervisors are not aware that the accused persons are supposed to be produced before court 48 hours after their arrest?” the judge asked, adding: “This is what you do and people sue the state for damages, leading to financial loss to the state.”

“Ghana is a democratic country and such things, if true, must not be allowed. Many Ghanaians are not patriotic because of the way state institutions treat them,” he said.