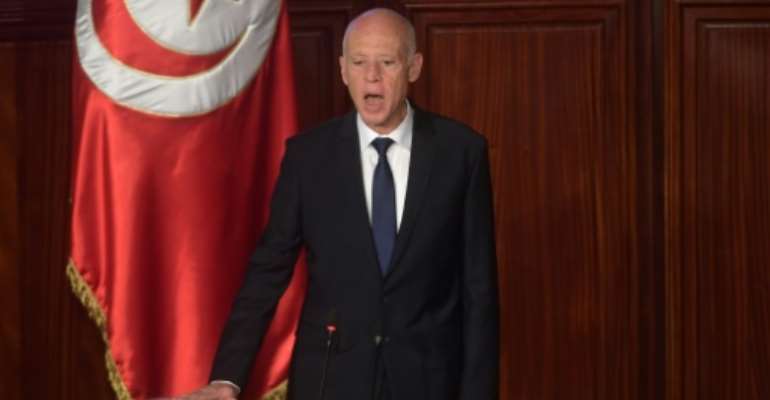 Tunisia's new President Kais Saied, an academic nicknamed "Robocop" for his rigid and austere manner, takes the oath of office after his upstart election victory earlier this month. By Fethi Belaid (AFP)

Saied, a conservative academic with no previous political experience who won the overwhelming support of younger voters in an October 13 runoff, was sworn in before members of the constituent assembly and other top state bodies.

He thanked all Tunisians for delivering "this historic moment", after handily winning over his controversial opponent, businessman Nabil Karoui, in an election that reshaped the country's post-revolution political landscape.

Tunisians, he said, "needed a new relationship based on trust with their politicians and those in power".

After sweeping 72.71 percent of the vote in this month's runoff, Saied has won a clear mandate to fight corruption and promote social justice, even though his role focuses on security and diplomacy.

A constitutional law professor whose rigid and austere demeanour earned him the nickname "Robocop", Saied vowed as president to "reunite" all Tunisians.

Tunisia's new President Kais Saied received a rousing round of applause from a packed parliament when he vowed to uphold women's right. By FETHI BELAID (AFP)

Despite having spearheaded the Arab Spring revolt that ousted dictator Zine El Abidine Ben Ali in 2011 and gaining unprecedented freedoms along the way, Tunisians have been bitterly divided between old political classes and Islamist forces.

Saied said his countrymen were "free in their beliefs and choices" but stressed the state must be immune from "political calculations".

"The people (Tunisians) have waited for so long...wanting to move from despair to hope", he added.

Honing his main talking points that distinguished him in the electoral race, Saied promised to uphold the rule of law.

He also reassured the chamber that "women's rights would not be diminished", which received a rousing round of applause from a packed parliament.

He went on to stress that he would "strengthen the rights of the Tunisian woman, especially her socio-economic rights".

Saeid has previously rejected a bid to overhaul Tunisia's inheritance law -- which remains based on Islamic law, meaning that women inherit half of their male siblings' part.

'Will of the people'

An international novice with no real foreign policy experience, he emphasised Tunisia's respect for "various international agreements but also to revise them according to the interest and will of the people".

The professor who up until his swearing-in Wednesday lived in a middle-class Tunis neighbourhood will now be moving to the presidential palace in Carthage.

Tunis, which currently chairs the Arab League, could renew diplomatic ties with Syria, severed since 2012, and play a role in the return of the war-torn country to the bloc.

He has made strong statements against Israel, considering any ties with the Jewish state to be "high treason" -- an Arab nationalist position that earned him praise among supporters.

While the security situation has significantly improved since a series of high-profile attacks on tourists in 2015, Tunisia has maintained a state of emergency for four years, with assaults against security forces persisting.

On June 27, a suicide attack killed two people in the heart of the capital Tunis, reviving the spectre of violence.

During the campaign debate, Saied said a key to fighting terrorism was education, arguing that improving primary education would "immunise" youth against extremism.

Another significant task he will face is reforming the police force, which was a cog in the dictatorship toppled by the Arab Spring revolt of 2011 and which continues to be accused of human rights abuses.