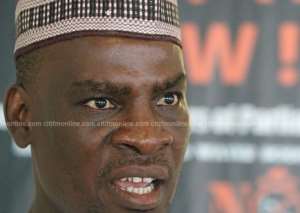 The Minority Leader, Haruna Iddrisu is accusing the Akufo-Addo government of causing financial loss to the state over the cancellation of the PDS concession deal.

He said the government’s action smacks of recklessness and fraud.

Speaking to Citi News on Wednesday, the Tamale South legislator said it was irresponsible of the government to act in that manner and misleading Parliament in the deal.

He further blamed government for failing to do due diligence and not thoroughly scrutinizing the PDS concession deal documents.

“We can turn this as causing financial loss to the state arising out of the reckless, fraudulent and irresponsible act of government in misleading Parliament and misleading the entire country without thorough and diligent scrutiny of the documents they submitted to Parliament,” he said.

Haruna Idrissu said the government failed to heed to caution about ensuring that the various agreements entered into by previous governments including the John Mahama administration.

Haruna Idrissu said Ghana stands to lose a lot due to the action of the government, adding that the NDC Caucus in Parliament is still deliberating on what action it could take.

He also called for the prosecution of persons whose actions led to the incident of fraud.

“We will lose more and we are discussing with the leadership of the party…We are looking at it from the angle of Parliament on what we can do. This will amount to financial loss of the State of Ghana and persons must be held responsible and accountable for it.”