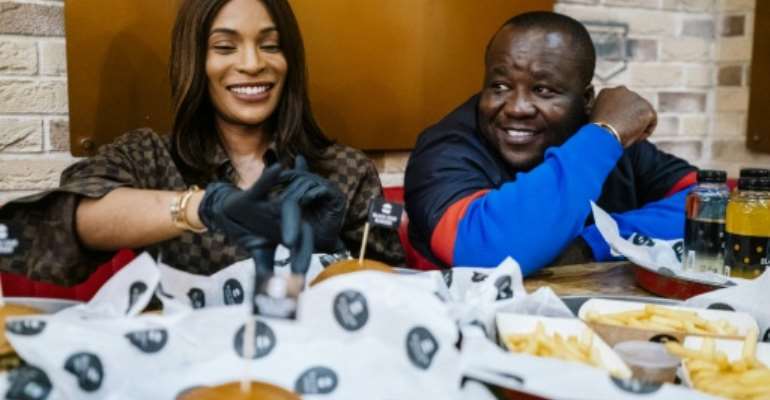 Cameroonian entrepreneur couple Walter and Cindy Tchassem are at the centre of a music and restaurant business empire in Russia. By Dimitar DILKOFF (AFP)

Decked out in gold jewellery and high-end fashion, Walter and Cindy Tchassem descend on a Moscow fast-food joint escorted by bodyguards.

Both originally from Cameroon, the couple are at the centre of a music and restaurant business empire in Russia.

"People can't understand how we did it, it's unique," Walter, 37, tells AFP at an outlet of the couple's Black Star burger chain on Moscow's Novy Arbat commercial strip.

"But I always say to them: When you believe in yourself and you work hard, anything is possible."

Originally a music label, Black Star has grown into a major brand, expanding into street-wear and restaurants. By Dimitar DILKOFF (AFP)

As President Vladimir Putin hosts African leaders this week for the first ever Russia-Africa summit, the Tchassems are a high-profile example of African entrepreneurial success in the country.

The son of a Cameroonian diplomat in Moscow, Walter has lived in Russia for 25 years and taken Russian citizenship.

Originally a music label, Black Star has grown into a major brand, expanding into street-wear and restaurants, with about 100 shops and burger chain outlets throughout the former Soviet Union and plans to expand into Europe.

The ex-Soviet Union can be a tricky place to do business, but Walter says he hasn't run into any problems. By Dimitar DILKOFF (AFP)

"In the long-term it's Africa that will be the winner, because Russia offers a lot of opportunities," he says.

The ex-Soviet Union can be a tricky place to do business, but Walter says he hasn't run into any problems.

"Our business is based on a lifestyle, it can go into any country because it's not political," he says, while still praising Russia's Vladimir Putin as "the best president on the planet".

Cindy, 32, focuses on public relations for the firm, while supporting an orphanage in Cameroon's economic capital Douala and planning to launch a charitable foundation.

She moved to Moscow in 2012 to join Walter after they met and married in Paris and the couple now have two sons aged four and six.

Cindy, 32, focuses on public relations for the firm. By Dimitar DILKOFF (AFP)

"You can build your own business in Russia by the age of 30, there is the potential for very fast success," she says.

"You can easily get rich no matter how old you are," Cindy says, though she admits Russia's "very macho" culture can make it difficult for women entrepreneurs.

Despite the racist attacks that for years made headlines in Russia, the couple says they have never suffered from racism.

"I have never felt that; the new generation of Russians travels, they understand things," Walter says.

In fact, he says: "I think it is less difficult here than in a country that colonised Africa."

The couple's business has helped by them become social media stars.

The couple's business has helped by them become social media stars. By Dimitar DILKOFF (AFP)

Together they have more than 400,000 subscribers on Instagram, where they post glamourous pictures of trips on yachts or private jets.

Walter says they hope their success can be inspiring.

"We want to make other young Africans dream," he says.

"There is this idea that the African is born to suffer, but this isn't true, you have to believe in yourself and work!"

The couple are often seen in colourful outfits from top designers, and Walter admits that fashion "is kind of my drug".

"I love it, I won't hide that I spend an enormous amount on it," he says.