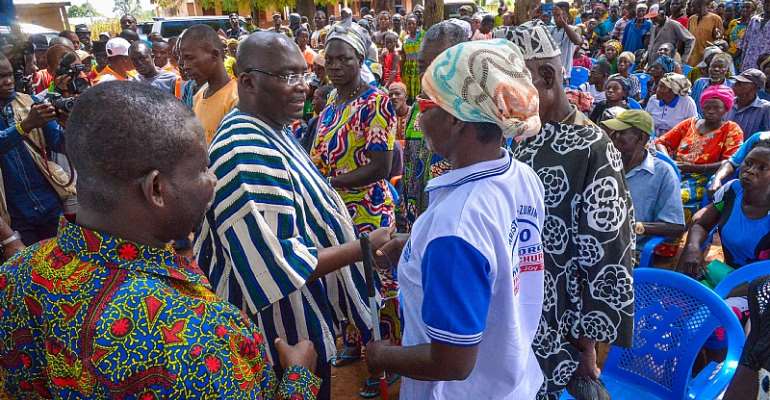 The disasters occurred as a result of a torrential downpour of rains starting from the early parts of September. The rainfall affected areas such as Bolgatanga, Navrongo, Bawku, Kasena Nankana West, Builsa North, Binduri, Garu, and Bongo.

According to the National Disaster Management Organization (NADMO), the rainfall led to 19 deaths and 19 injuries with several hundreds of people and households displaced. The nature of the effects ranged from lightening, collapse buildings, flooding, and others. Two of the deaths occurred as a result of flooding.

At Manyoro in the Kasena Nankana Municipal Assembly, the delegation met Chiefs, families of deceased, affected persons and community members. Addressing the gathering, Vice President Bawumia expressed his deepest condolences and commiserated with the bereaved families and victims of the rains.

“On behalf of President Nana Addo Dankwa Akufo-Addo and the people of Ghana I extend our sincerest condolences for the loss of lives and properties. Government is indeed concerned about the casualties”, Dr. Bawumia indicated.

Dr. Bawumia further bemoaned the use of low quality materials in the building and construction of shelters, particularly in the Northern parts of the country. He, therefore, appealed to the people to ensure there is an adequate amount of cement in their building materials to make their houses stronger enough to withstand harsh weather conditions.

On his part, the Chief of Manyoro who is also a law lecturer at the University of Ghana, Dr. Peter Atupaare III expressed gratitude to the government and the Vice President for the gesture done them.

“What happened to us is a natural disaster that no one anticipated. In times like this you sometimes just need the comfort of people. What the Vice President has done today is quite remarkable and I commend him”, the Chief recounted.

He continued, “a person who stands by you in times of difficulty is a good person and must be remembered in the future when he also comes to you for help. We have noticed what the government and the Vice President have done and we shall remember them in due time”.

“I am a native of Manyoro and throughout my father’s reign as the chief of this community to date I never saw a Vice President come to us like what this current Vice President has done. We are grateful to Dr. Bawumia.

The Vice President later visited the Tono irrigation dam to inspect how the torrential rains have affected the dam leading to some spillovers. Dr. Bawumia inspected some current structural defects developed in the dam and pledged the government’s commitment to fixing it.

“As you already know, the government is taking giant steps to address the perennial flooding that occurs in the Northern regions as a result of the spillage from the Bagre dam. We will soon commence works on the Pwalugu multi-purpose dam to provide irrigation for about 25,000 hectares of farmlands, drinking water and also check flooding. With this and the Tono dam, we will be able to cover large tracts of land for farming in the north and so we will do everything to ensure the Tono dam is in good shape to serves its purposes”, Dr. Bawumia indicated.