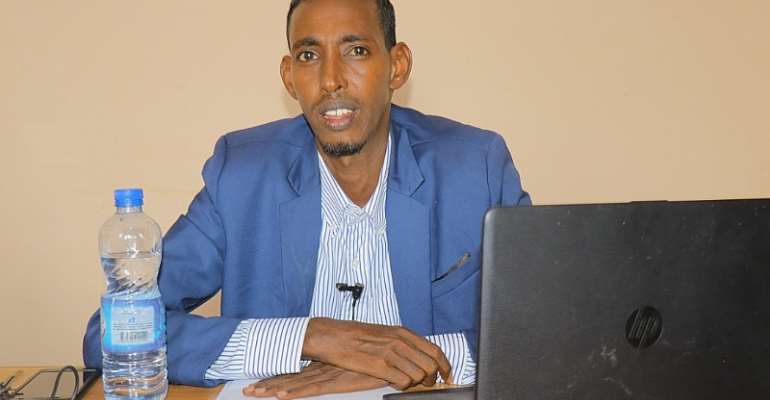 The National Union of Somali Journalists (NUSOJ) is dismayed by the arrest of the former managing director of Radio Daljir, Ahmed Sheikh Mohamed (Tall Man) who was arrested by the security forces of Somalia’s north-eastern Puntland state in Garowe town on 17th October 2019. The local authority did not publicly state the motive behind the detention of Ahmed.

“We call on Puntland authorities to immediately and unconditionally release the former radio director and stop ongoing harassment and intimidations against journalists on a mission to inform the public,” said NUSOJ Secretary General Omar Faruk Osman. “It is unfortunate that police officers are becoming more aggressive towards the journalists”.

NUSOJ strongly believes that Ahmed’s arrest is based on personal vendetta from Puntland police commissioner Gen Muhidin Ahmed Roble who gave the journalist to choose either to accept and apologize unsubstantiated, fabricated crime which he never committed, or face the full force of the law (in his own version). Ahmed refused to plead guilty.

Prior to his arrest, Puntland’s Supreme military court summoned the director on 24 September 2019 ‘for questioning’.

It was last month when Puntland Police raided offices of Radio Daljir in Garowe and Bosaso when the station aired the death of a prisoner as a result of alleged harsh torture by the state police.

The daring report revealed the human rights atrocities committed by the Puntland police. This has led the arrest of a senior journalist and briefly shut down the radio’s transmitter in Bosaso on 16 September 2019.

NUSOJ officials in Garowe town and family members of Mr Ahmed Sheikh Mohamed were refused to visit him. They were threatened with arrest if they come back again.

“Tallman’s arrest is a threat to the entire media fraternity and raises concerns over press freedom under the administration of President Said Abdullahi Deni, where the journalists are still harassed and jailed because of doing their journalistic work” added Osman.

NUSOJ describes these restrictive measures as “unlawful” meant to curtail the press freedom in Puntland.

Recent arbitrary arrests, intimidations, and threats by the security forces against independent journalists had been on the rise parts of Somalia, mainly in the northern regions of Puntland and Somaliland, making vulnerable the journalists and media workers in these respective regions.

PHOTOS: Ghanaians hit the streets of Accra for #FixTheCountr...
56 minutes ago