NABCO Trainees Must Be Employed Permanently — Akufo-Addo To Employers 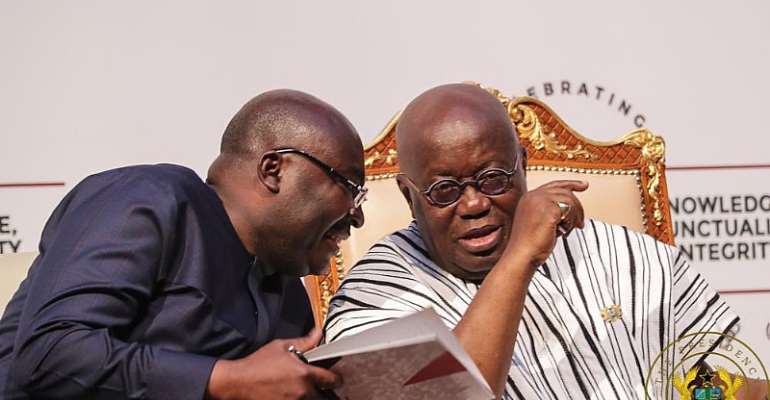 President Akufo-Addo has called on employers in both private and public sectors to consider permanent employment for beneficiaries under Nation Builder’s Corp (NABCO) programme whenever there are vacancies.

According to the President, the contribution of these beneficiaries will help boost the economy and generate enough revenue for the State.

Speaking at the One Year Anniversary of the Nation Builder’s Corp (NABCO) in Accra, President Akufo-Addo said “The various sectors are benefiting from the services of our personnel. We owe them this platform to exhibit their potential. They should be the first to be considered when opportunities for employment pop up in every organization”.

He revealed that prior to the inception of the programme, these beneficiaries had no option than to join unemployed groups like the Unemployed Graduates Association of Ghana.

He mentioned that previously, it took decades for graduates from the various tertiary institutions to find jobs but the story has changed.

“I pledge with great hope to shape the future of the youth of Ghana and help them realize their dreams. Japan, Singapore and South Korea among others are where they are now because there is vast number of youth working tirelessly for the country. This is where Ghana has to be,” he added.

He however noted that there are 12,715 NABCO trainees are working on the National Digital Property Addressing System.

President Akufo-Addo says he is confident every household will receive its house number, digital address among others.

“On the fight against galamsey, we have over 200 NABCO trainees working with the Inter-Ministerial Committee on Illegal Mining. In partnership with the University of Mines and Technology (UMaT) is providing skills to the trainees as operative groups to procure and are working on their license to become drone pilots,” he noted.

Speaking on government’s flagship, Planting for Food and Jobs he emphasized that the NABCO trainees are working as extension officers, fertilizer distribution and Mechanization.

He stressed that towards enhancing revenue globalization, NABCO has witnessed significant improvements as the Ghana Revenue Authority (GRA) has engaged 10% of its trainees.

President Akufo-Addo urged the trainees to cease the opportunities offered by the scheme to build a better future.

He commended Authorities in charge of NABCO for their hard work and partnership with the scheme adding that industrious trainees must be recognized and rewarded.

Chief Executive Officer (C.E.O) of NABCO, Dr. Ibrahim Anyars noted that the introduction of the policy has helped reduce the rising unemployment problems in the country.

He added, “In May last year, a portal was introduced where people were asked to apply. The intention of this portal was to reduce the rising unemployment problems in the country”.

He mentioned that although the policy sort to employ 100,000 youths, Authorities at NABCO received over 146,968 applications.

Dr. Anyars further noted that to be fair to all the applicants, interviews were granted to all applicants of which the best were selected.

He expressed gratitude to both public and private sectors that have NABCO trainees in their organization adding that the feedbacks are encouraging.

The C.E.O confirmed that the trainees within a year were spread across various sectors including Agriculture, Health, Education and Private Institutions among others.

"By the design of NABCO, it was supposed to be a training and learning section and we are ensuring that by the end of the 36 months.We have guaranteed for every NABCO trainee, 24 months of work placement and beyond then a well-structured learning programme to prepare them access the labour market,” he emphasised.

Dr. Anyars echoed that the NABCO programme is not permanent but rather a temporary relief to our struggling youth.

“For many on the scheme, the journey to their desired future careers have began. Most look to permanent employment as an exist pathway whiles others believe working in the private sector is a way for them to start their business,” he said.

Some beneficiaries who spoke to Modern Ghana lauded the President for the initiative and promised to may hay whiles the sun shines.

Some said “We accept that we are the cause of the delay in our salaries. Some of us do not adhere to simple rules but moving forward, we will not repeat such mistakes”.

FixingTheCountry Movement to march in support of Akufo-Addo'...
12 minutes ago