Farmers Weep Over 'High Cost' Of Fertilisers Under PFJs 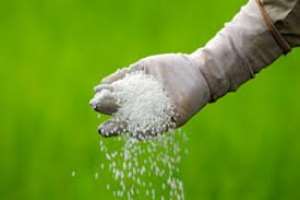 Farmers in the Sunyani West District have complained over high cost of fertilizers, despite government subsidies under the implementation of the government's Planting for Food and Jobs (PFJs) programme.

They lauded the PFJs programme, but added that the cost of NPK fertilizer was still high, and required downward adjustments to enable them to afford it.

Instead of GH¢100 in the open market, fertilizers are being sold to farmers registered under the PFJs between GH¢70.00 and GH¢75.00.

But, in an interview with the Ghana News Agency (GNA), the farmers said despite the cost of the agro-chemicals, it was also difficult for them to access and buy the fertilizers.

Mrs Agartha Ayiwa, the spokesperson for farmers at Kankro in the District, observed that many of the farmers had registered under the PFJs and appealed to the government to review the subsidies.

She said reduction in the cost of the agro-chemicals and inputs would make the programme more attractive for the farmers to expand their farming activities.

Mr Gilbert Sonkpi, the Sunyani West District Director of Agriculture, explained that the government had directed the Ministry of Food and Agriculture (MOFA) to ensure that farmers bought agro-chemicals under the PFJs from certified dealers.

He advised the farmers to contact agriculture extension officers in their localities who would also assist them to identify the dealers to buy agro-chemicals from.

Though, Mr Sonkpi could not immediately provide statistics, he said majority of farmers in the District had registered under the PFJs.

He said the implementation of the PFJs had made farming a lucrative business, and advised the farmers to plan well and keep records of their activities.

Mr Sonpki advised traditional authorities to support the PFJs by releasing lands to interested youth to engage in farming as commercial and joint ventures.