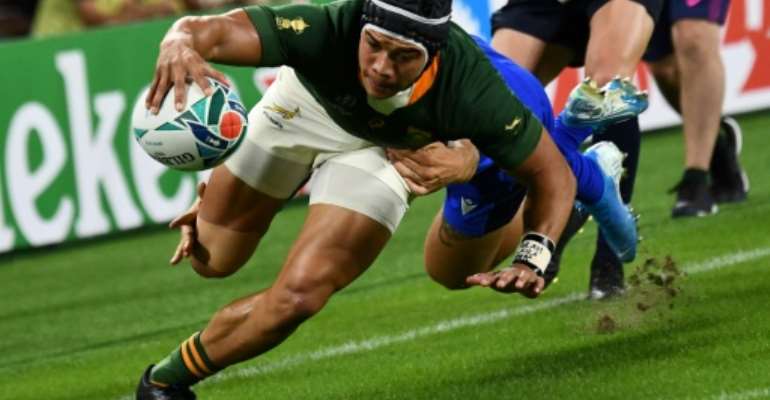 Springbok pocket-rocket Cheslin Kolbe, one of the stars of the Rugby World Cup, admitted Wednesday he had a soft spot for the free-flowing attacking style employed by quarter-final opponents Japan.

The hosts are the shock inclusion in the last-eight knock-out phase, having won all four games in Pool A, including memorable victories over Six Nations giants Ireland and Scotland.

"Japan are definitely playing an exciting brand of rugby," said Kolbe. "They're giving the ball a lot of air and they want to stretch your defensive structures.

"It's definitely a style I'd love to play."

Kolbe, whose diminutive stature belies the rugby stereotype of bigger is better, was full of praise for try-scoring Japan wingers Kenki Fukuoka and Kotaro Matsushima, who have both enjoyed fantastic World Cups.

"We all have something special we can contribute to our various teams."

"Fukuoka is a very good player, he's got a lot of speed, he's really powerful and explosive... a really good all-round player.

Kolbe has already played against Fukuoka, when helping South Africa to victory over Japan in the bronze medal match in the Rio Olympics rugby sevens competition, and also the Pretoria-born Matsushima, in the domestic Currie Cup back in 2012.

"Matsushima loves to run with the ball and just have a lot of freedom," he said.

Kolbe has underlined his status as one of rugby union's hottest properties with a couple of scintillating displays in Japan, combining lightning footwork with an ability to ride a tackle, and solid defence.

"I love to have ball in general play and having one-on-one opportunities within a game and create as many opportunities not for myself but players around me," the Bok said.

"There are lots of different situations in the game where you have to be the best in every ability that you can, especially whe it comes to high balls, defence and running with ball in hand.

"I enjoy running with the ball in hand and whenever I do get opportunities, I'll make sure I keep on having fun!"

Kolbe made his international debut only last year after being previously told he was too small for international 15-a-side rugby.

The winger said that that had coincided with the "tough decision" to quit South Africa for a stint overseas.

"In that stage of my rugby career, starting a young family, I had to make a tough decision and I just thought I needed a new challenge in my career," the 25-year-old said.

"Getting an opportunity to go abroad was a challenge I wanted to face. It wasn't easy, firstly as a player, but joining Toulouse in France has been a good decision for me, they've welcomed me with open arms and made everything much easier for me as a player."

Kolbe said the ankle he rolled in the Springboks' 49-3 demolition of Italy had "healed up really well", and that he was "confident and ready" to play.

He added that little stock was now put in the 2015 World Cup pool defeat by Japan, widely regarded at the time as one of the sport's biggest upsets.

"We know that it's happened, it's four years later, it's a new opportunity for us and we keep on building," he said.

"We'll make sure we're really well prepared and just implement what the coaches want from us and not have what happened in 2015 at the back of our heads."

Trade Minister’s promise to open Komenda Sugar factory ‘a me...
48 minutes ago