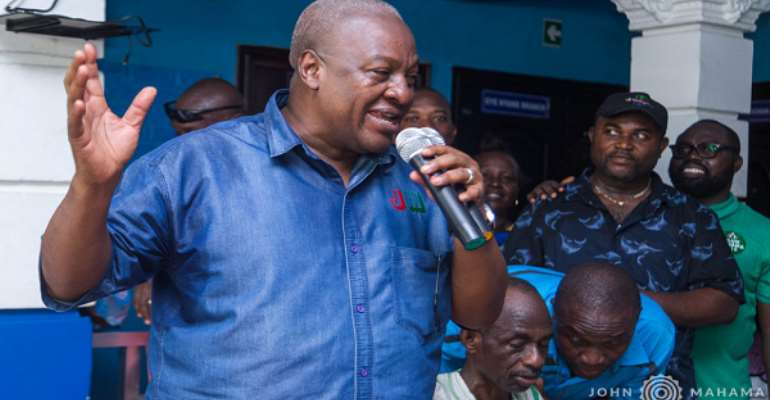 The flagbearer of the National Democratic Congress (NDC), John Dramani Mahama, has conferred with Asantehene, Otumfuo Osei Tutu II, the leadership of University Teachers Association of Ghana (UTAG) as well as the Ghana Bar Association (GBA).

The three important meetings took place in Kumasi and Accra but on different occasions as the discussions form part of the NDC and John Mahama’s ongoing engagements with stakeholders and key groupings ahead of the 2020 general elections.

The session with Otumfuo, The Catalyst gathered was behind closed-doors but was exceedingly successful. The NDC’s national leadership later joined Otumfuo and Asanteman at the ‘Akwasidae’ celebration.

In the meeting with UTAG leadership, the flagbearer of the NDC advised the Akufo Addo government to stop interfering in the running of Universities.

He said the NDC will continue to promote greater academic freedom in the universities, promising that occurrences like the disturbing developments on the campuses of the University of Education, Winneba, and the Kwame Nkrumah University of Science and Technology (KNUST) will never occur under his administration.

The NDC flagbearer has therefore cautioned the Akufo-Addo government against its actions that are affecting cordial engagements among lecturers and also management members, and ultimately affecting teaching and learning in the Universities.

His Excellency John Mahama maintained that government has no business interfering in the running of the universities, noting that the universities have their own autonomous structures in place to deal with their administrative issues.

Mr Mahama restated the NDC’s opposition to the Public Universities Bill, affirming that each and every university must remain autonomous and conduct their affairs without the intended interference in their activities.

“Every university, based on its diversity and what its objectives are must have its separate Act… if there are issues with the Act [that established a university], we can amend the Act for that particular university,” he stated.

The meeting discussed many topical issues including remuneration, steps towards the introduction of sustainable grants for research and graduate education, the management of utilities on campus, the infrastructure deficit in the universities and the role universities can play in managing the unemployment challenge facing Ghana and other African countries.

According to former President Mahama, the interactions are aimed at sharing ideas, listening to the concerns and expectations of the various groupings to shape the party’s manifesto for 2020.

The outgoing president of UTAG, Dr. Eric Opoku, thanked the NDC flagbearer for responding to the invitation and expressed the desire that there will be more of such interactions even after he assumes the presidency on 7th January 2021.

In a separate meeting with the leadership of the Ghana Bar Association (GBA) in Accra, Mr Mahama said his next administration will give priority to increasing access to legal education without compromising quality.

“My next administration will focus on increasing access to legal education without compromising quality. We will definitely put in place the appropriate legal structures to increase intake,” he stated.

He said every necessary consultation with key stakeholders will be done in that regard, adding that a lot of Ghanaians, particularly in the countryside are in need of legal services but unable to get same because of limited number of trained lawyers available in the system.

The NDC flagbearer reiterated his resolve of expanding access to legal education at another forum when protesting law students presented a petition to him in demand of Legal Education Reforms in Ghana.

Meanwhile in another development, leaders of the National Association of Law Students have accused Deputy Attorney General, Godfred Dame as the one who ordered the Police to attack them during last Monday’s demonstration.

The Association embarked on a demonstration to demand reforms in legal education in Ghana.

Twelve members of the group and a reporter for a news website, YEN.COM were arrested by the Police and detained for supposedly being violent, a claim the group flatly denied.

Solomon Osei-Fosu, a leader of the group told host of Asempa FM’s “Eko Sii Sen” programme that when the protestors converged at the premises of the Attorney General’s office, the Deputy Attorney General, Godfred Dame drove to the place and in the process of being mobbed, he rolled down his side mirror and asked in twi “mo ye demonstration a, aha na mo di beba”? To wit “if you are demonstrating, should this place be your destination?”

Mr Osei-Fosu, said soon after that the Deputy AG rolled up his side mirror and drove off and that all attempts to have him receive a copy of the petition meant for his boss, Gloria Akufo failed.

He said it was not long after when the police accosted them, using water cannons, rubber bullets among others on them.

Solomon Osei-Fosu said but for the encounter with Godfred Dame followed by the attack of the Police, the demonstration has been most peaceful from the beginning to all the other designated placed they went.

In his reaction, Godfred Dame denied the claim of ordering the attack on the Law students and said that he was prevented from accessing his office and that he had to drive away to use another route to get to his office.

Meanwhile, Deputy Chief of Staff, Samuel Abu Jinapor who was designated to receive the President’s petition, in reacting to the matter said the police were doing their job.

Sitting comfortably in his car during the address of a section of the media, Abu Jinapor who said he was waiting to receive the petition from the demonstrators, added that government could not be blame for the excessive nature of the police action and that they (Police) were doing their job.