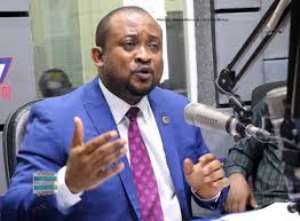 He says the former President talks like a serial caller.

He stressed that Mr. Mahama makes comments like ordinary politicians without supporting his allegations being made against the government with facts.

The Flagbearer of the NDC alleged that the government is planning to wreak havoc and plunge the country into chaos during the 2020 elections by training thugs.

Reacting to former President Mahama in a sharp rebuttal, Mr. Hadzide noted that Mr. Mahama has developed the attitude of always spreading false allegations against the government and believes it is a poor propaganda a stateman should engage in.

“I don’t understand why NDC and John Mahama always lie to Ghanaians, the former President talks like a serial caller, he always makes wild allegations and propaganda to lie to Ghanaians,” Pius Enam Hadzide exclusively told Kingdom News on Accra based Kingdom FM 107.7.

He admonished the former president to desist from such act of spreading lies since he has a high reputation.

Mr. Hadzide also wondered if Mr. Mahama has lost his memory on issues of ignoring recommendations given by commissions of inquiries saying he lacks the ability to speak on the matter after ignoring some commissions reports in the past.

Background
Former President John Mahama has alleged that the current administration is planning to wreak havoc and plunge the country into chaos during the 2020 elections.

He said he knows of a letter by the Upper West Security Council requesting that some members of the governing New Patriotic Party (NPP) be presented for combat training for next year’s election.

He made the allegations when he met with the Ghana Journalists Association (GJA) President, Affail Monney, as part of a courtesy call the GJA President has been making to some identifiable groups.

“If you lose an election and you believe that it was free and fair, you don’t any cause to cause confusion. But if you feel that you were cheated, then sometimes emotions can run high,” the opposition National Democratic Congress (NDC) flagbearer stated.