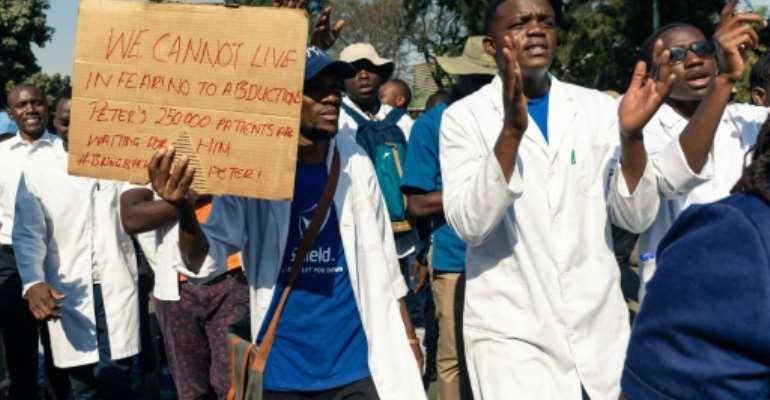 Striking Zimbabwe doctors on Monday defied a court order to return to work, saying a pay rise offered by the government failed to meet everyday costs.

Doctors remained home for a 43rd consecutive day, striking for better pay after their salaries were eroded by the country's spiralling inflation.

Zimbabwe's labour court ruled the action "unlawful" on Friday and ordered the medics back to their wards within 48 hours.

The Zimbabwe Hospital Doctors Association (ZHDA) announced Sunday it would lodge an appeal to the Supreme Court.

"We noted the court order but unfortunately we don't have the means by which to comply," said ZHDA spokesman Masimba Ndoro on Monday.

"We remain incapacitated... There is nothing we can do when we don't have the means to go to work and to meet our basic needs," he told AFP.

The doctors say their pay has lost value by at least 1,500 percent, a legacy of economic mismanagement under Zimbabwe's ex-president Robert Mugabe.

His successor Emmerson Mnangagwa has so far failed to redress the situation.

Fuel prices have increased by more than 400 percent since the start of the year, and the ZHDA said that doctors had to use their savings just to show up to hospital each morning.

Negotiations with the government have been deadlocked since the ZHDA rejected a 60 percent salary rise offer.

With pay slips worth less than $100 (91 euros) in some cases, they are demanding doctors' salaries be pegged to the US dollar and have appealed to international bodies to supplement their wages.

"While doctors would want nothing more than to return to work in service of their patients, they continue to be incapacitated and lack the resources to comply with the Labour Court judgement," said ZHDA in a statement on Sunday.

Nurses at two of the country's largest government hospitals in Harare last week joined the action and walked quit the wards, according to local media.

Rural teachers also embarked on strike action on Monday with a stay-at-home protest "against underpayment".

"We urge the government to respect our right to engage in job actions and peacefully protest demanding a living wage," the Amalgamated Rural Teachers Union of Zimbabwe posted on Twitter.