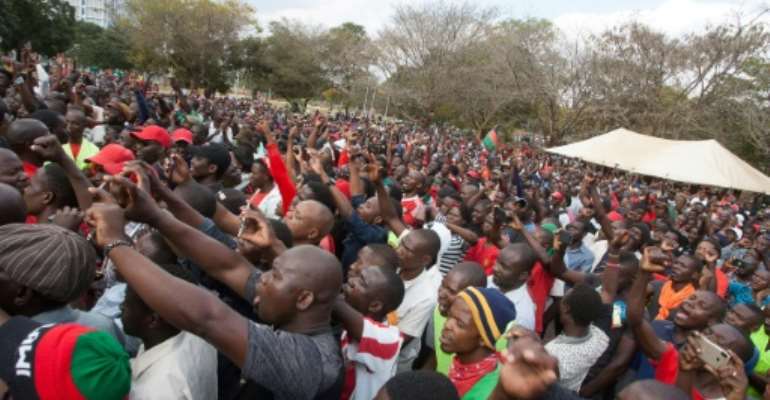 Malawi opposition supporters march to the parliament during a demonstration against the re-election of the president, which protestors say was due to fraud, on July 4, 2019, in Lilongwe, Malawi. By AMOS GUMULIRA (AFP/File)

Six foreign ambassadors in Malawi on Friday condemned a spate of violent protests that have rocked the country since presidential elections in May, in an unprecedented diplomatic reaction to the crisis.

The ambassadors of Britain, Germany, Ireland, Japan, Norway and the United States issued a joint statement on Friday condemning "any form of violence".

Thousands of people across Malawi have repeatedly taken to the streets to contest the re-election of President Peter Mutharika, who only narrowly secured a second five-year term.

Many of the protests have erupted into violent clashes with police and government supporters, which culminated in the deadly stoning of a policeman by an angry mob near the capital Lilongwe this week.

Two other people are believed to have died as a result of the unrest.

The ambassadors called on the government to investigate "all criminal acts" and "allegations of misconduct by security forces".

"This (the violence) has resulted in loss of life, damage to property and businesses, and disruption to the lives of many Malawians," said the statement.

"It is especially important for all sides to refrain from violence or the incitement to violence."

The protesters want the head of Malawi's electoral commission to step down over the vote-counting process, which the opposition say was marred by irregularities.

The constitutional court is considering a demand by the opposition to annul the results, and the ambassadors urged "all parties... to respect the outcome".

Forty people have been arrested so far in relation to the demonstrations.

FixingTheCountry Movement to march in support of Akufo-Addo'...
15 minutes ago