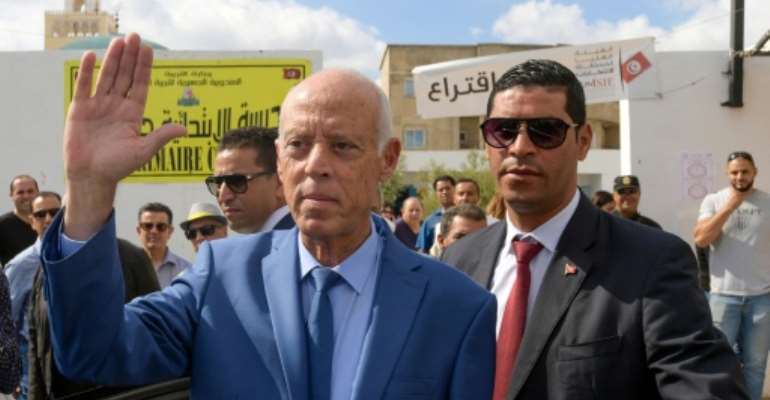 Political newcomer Kais Saied, who is standing in Tunisia's presidential election runoff, is a conservative academic whose rigid manner has earned him the nickname "Robocop".

Saied will square off against rival upstart Nabil Karoui, a business tycoon who was jailed for more than a month in a money-laundering probe.

Both are seen as anti-establishment candidates, but their demeanour could not be more different.

While Karoui, who walked free Wednesday, is fiery and flamboyant, Saied is seen as uptight and unwavering.

Beneath Saied's austere style is a commitment to socially conservative views and to decentralising Tunisia's political system.

He has defended the death penalty, criminalisation of homosexuality and a sexual assault law that punishes unmarried couples who engage in public displays of affection.

Born in Tunis on February 22, 1958 into a middle-class family, Saied is an expert on constitutional law who taught at the Tunis faculty of judicial and political sciences from 1999 to 2018.

He retired last year, and launched an unorthodox election campaign that saw him shun mass rallies and focus instead on door-to-door canvassing for votes.

Some of his supporters still address him as "professor" -- even though he has few published works and never earned a PhD.

He has two daughters and a son. His wife, a judge, has remained behind the scenes through much of his campaign.

Saied has been nicknamed "Robocop" because of his rigid self-presentation and speech and posture and expressionless demeanour.

But several of his former students have praised Saied, saying that beneath his tough exterior is a devoted teacher.

"He could spend hours outside class time explaining a lesson or helping us understand why we'd received a certain grade on an exam," one of his students tweeted.

He was "a serious teacher, sometimes theatrical, but always available and ready to listen", said Nessim Ben Gharbia, a journalist who took a course with Saied from September 2011 to June 2012.

Among his supporters are activists he met during the 2011 protests that raged following the ouster of dictator Zine El Abidine Ben Ali, demanding a complete overhaul of the political system. 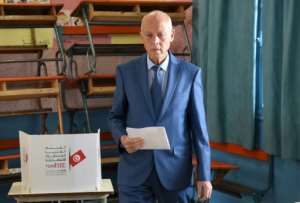 Impeccably dressed and with a rigid manner, Saied has been nicknamed 'Robocop'. By FETHI BELAID (AFP)

Saied became a household name when he became a regular political commentator on TV during the drafting of the constitution adopted in 2014.

Among his policy pledges are a radical decentralisation of power, along with the creation of a new network of elected local councils led by officials who would face the sack if they abuse their power.

In an online video, he is seen defending his vision as a roadmap to ensure "that the will of the people reaches all the way up through the highest ranks of the central government, and to put an end to corruption".

The support he has built has been buoyed by a broad rejection among voters of the post-Arab Spring political establishment.

While Tunisia has succeeded in curbing jihadist attacks that rocked the key tourist sector in 2015, its economy remains hampered by austere International Monetary Fund-backed reforms.

In his own no-frills life, Saied appears to embody the anti-corruption message he seeks to spread: he lives in a middle-class neighbourhood in Tunis and his office is housed in run-down flat in the heart of the capital.

And while he makes no secret of his conservative views, he says he would respect the social freedoms enshrined in law in recent years that civil society groups have hailed as victories.

"We will not backpedal on the rights we have gained in terms of our freedoms, in terms of women's rights," Saied has said.

Yet he rejects a bid to overhaul Tunisia's inheritance law -- which remains based on Islamic law, meaning that women inherit half of their male siblings' part.

But experts say they do not make him an Islamist.

"He is indeed an ultra-conservative, but he is no Islamist. He does not make of his personal convictions his priorities," constitutional law expert and Saied's former teacher Iyadh Ben Achour told French newspaper La Croix in a recent interview.