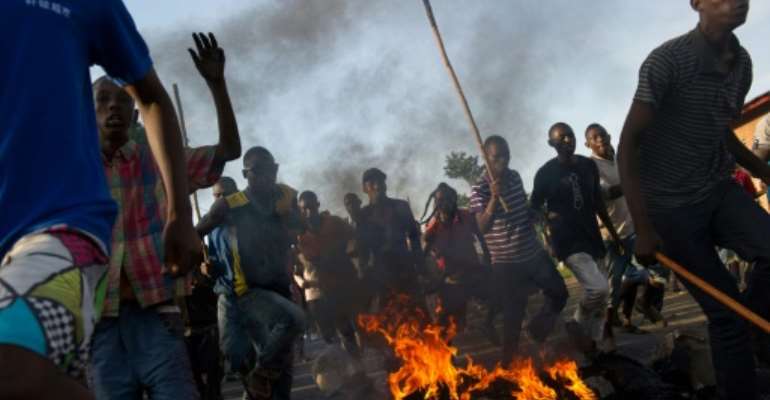 Protests against President Pierre Nkurunziza have been been ruthlessly suppressed -- more than 1,200 people have died. By PHIL MOORE (AFP)

Diplomatically isolated and its economy on the skids, Burundi is cautiously reaching out to its opponents in a bid to ease a deepening four-year-old crisis.

In the past few days, President Pierre Nkurunziza's government has met with CNARED -- a forum of exiled opposition figures that opposed Nkurunziza's decision in 2015 to defy constitutional limits and seek a third term in office.

At least 1,200 people were killed in the violence that followed and more than 400,000 people fled their homes, prompting Burundi to become the focus of a probe by the International Criminal Court (ICC) for alleged murders, rapes, torture and disappearances.

The talks in Bujumbura took place with CNARED's executive secretary, Anicet Niyonkuru, say sources within CNARED and the government.

CNARED, which has been weakened by an exodus of members in recent months, has refused to confirm the meeting publicly.

According to the government, Niyonkuru has been in the capital to prepare for the 2020 elections, for which Nkurunziza says he will not run again.

But the sources said that the latest meeting was a further step in a process of clandestine contacts that has been unfolding for several months.

A diplomat, speaking on condition of anonymity, said the reason for the secrecy was clear.

"Within the Burundian government, there's a moderate camp which contends that the country will hit the wall if nothing is done to end the present crisis, and a hardline camp, mainly consisting of generations from the (ruling) CNDD-FDD (party), who refuse to make any concession because they fear that they will lose everything."

"It's the former camp (the moderates) which has started the contacts with CNARED, albeit in the greatest discretion," the diplomat said.

Prior to Saturday's meeting in Bujumbura, a CNARED met in Nairobi on August 30 and September 1 with a government delegation headed by former interior minister Edouard Nduwimana, a Nkurunziza ally.

At that meeting, "we found common ground, notably on the question of lifting arrest warrants against exiled opposition leaders, the return of these leaders to enable participation in the 2020 elections, their safety, and the opening up of the political space," a senior CNARED figure told AFP.

But afterwards Nduwimana downplayed the meeting -- he issued a statement saying he had acted on his own initiative, and not in the name of the government, and had gone to Nairobi to meet political leaders who were not targeted by arrest warrants.

A senior government official said that Nduwimana had definitely been sent by President Nkurunziza, and that the statement had been published only because it had been demanded by hardliners.

The government's apparent overture has extended to other figures in the Burundi crisis, including Belgium, the former colonial power.

After recalling its ambassador to Belgium in 2016, Burundi has just named a new envoy. General Evariste Ndayishimiye, the general secretary of the ruling CNDD-FDD, has also had a meeting with the president of the African Union commission, and diplomats say that there has been a slight fall in violence in Burundi.

Burundi plunged into conflict in 2015 when President Pierre Nkurunziza announced a controversial bid for a third consecutive term in office. He has said he will not stand in the next elections, due in 2020. By CARL DE SOUZA (AFP)

Underpinning the strength of the moderates' camp is mounting worries for Burundi's economy, which is slowly suffocating under the impact of economic sanctions, said the diplomat.

"The country is on the brink of bankruptcy," the source said.

Shorn of precious foreign help, the central bank has just two to three weeks' of hard-currency reserves, which are needed to buy desperately-need fuel, medicines and other essentials.

But another factor that has help to prod the government towards talks with the opposition is a bustup within the CNARED.

The group has been hit by a number of walkouts, including prominent radicals who have been demanding that Nkurunziza be arrested for crimes committed by the regime.

That has left an organisation run by leaders who align themselves with a dominant international view -- that Burundi should focus primarily on holding free and fair elections.

These deem themselves "realists" but are criticised by radicals as "traitors" -- a moderate-hardline cleavage that ironically seems to mirror divisions within the government.

Abroad, the wall of sanctions around Burundi has also cracked -- late last year, France defied EU criticism to revive cooperation with the country, notably in defence.