Kindness of strangers tips the scales in strife-wracked Mali 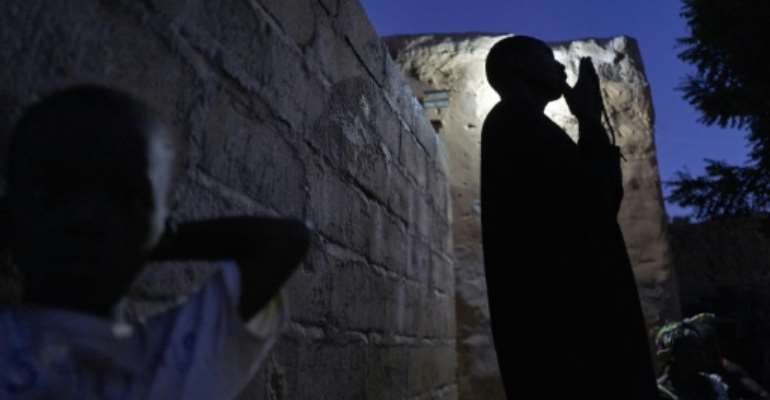 Issa Haidari, who shelters people displaced by violence in Mali, prays after nightfall in the garden at his home in Segou. By MICHELE CATTANI (AFP/File)

The courtyard of Issa Haidara's home in the central Malian town of Segou fills up rapidly at nightfall -- testimony to the kindness of strangers.

In quieter times, Haidara lived in the house with his wife, their five children and an aunt. But this night, 29 more people have filed in through a small metal door.

"They're displaced, by the grace of God, this is how it is in Mali," said the householder, a tailor of 51 with a ready smile, clad in a flowing black African robe, or boubou.

Despite his meagre income (8 euros on good days), Haidara has never hesitated to take people in when destitute villagers fleeing a bloody conflict flooded Segou in their thousands.

"This is Mali, this is the custom, it is God who wills it," Haidara repeats firmly.

A jihadist uprising began in northern Mali in 2012 on the back of a Tuareg rebellion in the Sahara. In January 2013, elite French troops helped to rid key desert towns, such as Timbuktu, of the fighters, but the conflict changed shape.

Armed Islamists initially fell back into the arid northeastern badlands, but since 2015 violence has spread to the centre of the country, forcing tens of thousands to abandon their homes.

Among the first to be taken in by Haidara six months ago were Amadou Semasekkou, 58, his wife and their five children, who fled an ethnic Fulani village in the region of Mopti, a central garrison town.

Semasekkou's family had felt threatened by the warriors of radical Islamist preacher Amadou Koufa on the one hand and by communal conflict involving the Bambara and Dogon peoples on the other.

A specialised commission has counted more than 300,000 Malians far from home. Almost 140,000 have become refugees in neighbouring Mauritania, Niger and Burkina Faso, while more than 170,000 are displaced in their homeland.

Some 20,000 people have come to Segou, a town that has so far been relatively free of violence.

Sleeping mats have been laid in the courtyard of Haidara's house and the living room rearranged to house those sheltering there.

Semasekkou was a farmer cultivating millet at Mamba village near Mopti until 2017 when "terrorists" came and kidnapped him.

"I spent a year and a half with them in the forest. I went out to the fields to grow food for them," he said, wearing a loose purple robe and glasses that had seen better days.

Displaced children play in the court of a house in Segou, central Mali, where their families seek refuge from violence. By MICHELE CATTANI (AFP/File)

Semasekkou says he has no idea why the jihadists decided one day to let him go, but he managed to return to Mamba, be reunited with his family and take the road into exile.

Their trek took several months and stops in several towns before they set foot in Segou and soon found a place to rest at Haidara's house.

Semasekkou does odd jobs such as "building work, work in the fields," wandering around the town and offering his services for 1,500 CFA francs (2.3 euros) a day.

Looking for work from street to street is also the daily lot of Awa Pamata, a woman of 27 caring for two children.

She offers to wash residents' clothes in the broad Niger river and she charges 1,000 CFA francs (1.5 euros) for a day's labour.

Though not much, "there's always this to add to the communal fund," Hamata says, for all the 37 people who benefit from the Haidara family land contribute to the joint effort.

With cleaning work for the women, building site labour for men and market jobs like fetching and carrying for the youngsters, the members of this group earn money to feed everyone.

"Before they arrived, I bought 50 kilos of rice and it lasted a month. Today, we've gone up to 150 kilos a month and sometimes it isn't enough," Issa Haidara says, but there are food distributions by the government and some NGOs that help.

Every franc counts and all hands are useful, Haidara says, but he doesn't include children. Child labour is widespread in Mali and contributes to a low rate of school attendance.

Still, almost none of the 15 children living in the compound goes to school. Instead they play and run around, proving quite a handful. "At least they're having fun," says Awa Pamata.