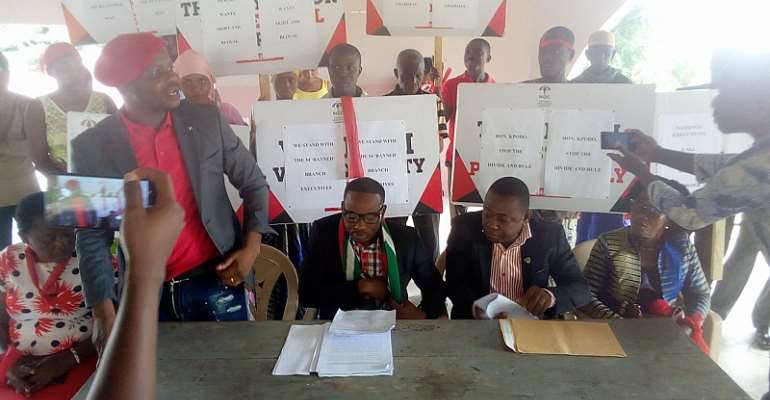 Some 54 branch executives from 6 branches of the Ho Central Constituency of the National Democratic Congress have called on the party hierarchy to give them answers for their exclusion from the party's electoral role during the recent parliamentary primaries.

The 6 branches including GPRTU branch A, Kpevele RTC branch B, Takla Temp Booth, Atiyinu, Klefe Demete branch, and Area 52 branch were barred from taking part in the Parliamentary Primaries held on Saturday 24th August, for a number of reasons as explained by a member of the electoral committee, Mr. Kodobisah, regarding their establishment, saying "it was not done legally".

However, at a press conference in Ho on Wednesday, the group led by Mr. Richard Kobla Nyamalor, intimated that their exclusion was meant to satisfy a hidden political agenda.

"After filling of nominations by all candidates, rumours began to hit the airwaves that some five branches would be removed from the register. It was argued that these branches were not legal branches as they did not have codes from the Electoral Commission.

However, the hidden truth was that these branches were touted as strongholds for a particular candidate, for that matter, if they were allowed to vote, it will be an advantage to the candidate", he said.

According to the group, there were a number of meetings at the constituency and regional levels to resolve the issue but that was never fruitful.

As a result, the six branches were expelled from the register on the day election -a development that nearly marred the voting process, though they took part in the flagbearer elections of the party held earlier.

The group went further to accuse members of the five-member adhoc electoral committee of being bias in pursuit of entrenching the incumbent, Hon. Benjamin Komla Kpodo as the party's parliamentary candidate for the 2020 elections.

"We have identified that the electoral committee was manipulated to support the incumbent MP to win the election and this has created a big crack in the Constituency."

It stated also that after the election, there have been attempts by some elements within the party to oust from office, the Constituency Chairman, a move the group described as dangerous for the fortunes of the party in the 2020 elections.

The group also threatened that they may defect and campaign against the party if leadership of the party did not act swiftly to resolve their concerns.

The MP, Benjamin Komla Kpodo, who spoke to some journalists in reaction to the press conference, mentioned that the removal of the 6 branches was a directive from the National Executive Committee of the party, following disagreement over their legality of their creation.

He also denied the claims of constituting a new Electoral Directorate, without following due process.

He, however, affirmed that there is internal wrangling within the Constituency leadership, which efforts are being made to resolve.

Ken Agyapong is only brave on NET2 TV but actually a coward ...
13 minutes ago