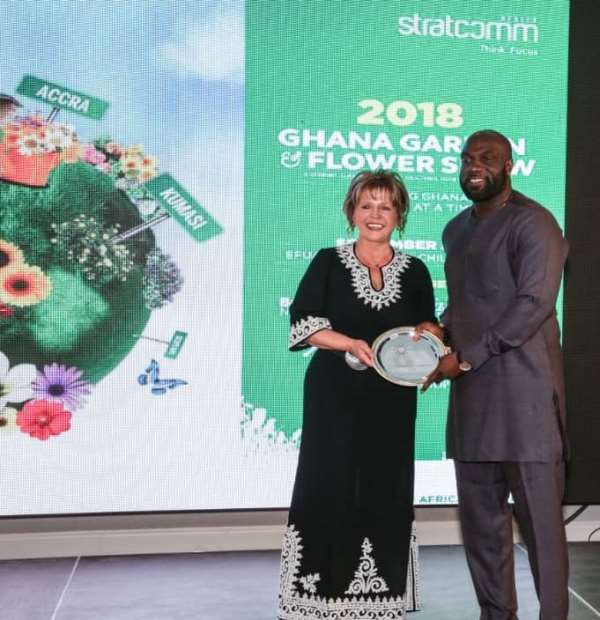 Strategic Communications Africa Ltd. (Stratcomm Africa) has received an International Public Relations Association (IPRA) award for its innovative use of communication in promoting positive behaviours towards environmental conservation in Ghana through its ground- breaking Ghana Garden and Flower Movement.

This was at the 2019 IPRA Golden World Awards for Excellence in Public Relations event which took place on 27th September, 2019 in Yerevan, Armenia. Awards, under various categories of public relations practice, were won by a number of PR agencies from different parts of the world.

The Stratcomm Africa award was presented by Svetlana Stavrena, President of the IPRA. A citation accompanying the award recognized Stratcomm Africa’s professional use of Public Relations and Communications as a Behaviour Change tool to contribute to the Sustainable Development Goals.

The annual Ghana Garden and Flower Show is the flagship activity of the Ghana Garden and Flower Movement which was initiated by Stratcomm Africa in 2013. The movement seeks to create awareness among Ghanaians about the environmental commercial, aesthetic health and psychological benefits of horticulture and floriculture. It also seeks to celebrate Ghana’s unique flora and fauna. The 2018 edition of the Show, which won Stratcomm Africa the award, was held from the 20th to 26th September 2018 on the theme, “Enriching Ghana a Garden at a Time.”

Stratcomm Africa was the first Ghanaian company to win an IPRA award and also the first company in the West African sub-region to win the prestigious UN IPRA award since the establishment of the Golden World Awards in 1990. In 2016, Stratcomm Africa received an IPRA award for a PR campaign implemented for Access Bank, Ghana, “Colour me W”, that promoted the UN Goal of Gender Equality (UN Sustainable Development Goal 5).

Spring PR, an Armenian PR company, hosted the event, which was well attended by IPRA members from all over the world. The Chairperson of the Armenian Board of Tourism was also present at the event. The Golden World Awards has since 1990 been recognizing excellence in Public Relations across a variety of categories.

Stratcomm Africa’s Business Development Manager, Kofi Baah-Boakye who received the award on behalf of the organization said: “Stratcomm Africa is this year celebrating 25 years of its existence with the theme, Communication Excellence for Africa’s prosperity. We are encouraged by this recognition and will continue to deliver excellent communication service as we know how important this is for the prosperity of African countries and the well-being of their citizens.” “We thank God for how far He has brought Stratcomm Africa”, he added. –END-

Background to the IPRA Golden World Awards for Excellence.

The annual IPRA Golden World Awards (GWA) initiative, established in 1990, recognizes excellence in public relations practice worldwide in a variety of categories. Recipients of the awards take particular pride in the recognition granted to their entry as meeting international standards of excellence in public relations. An overall IPRA Grand Prix for Excellence is presented each year to the entry judged as representing the highest standards that year. While there are many national and regional PR awards, there is only one truly global scheme: the GWA.