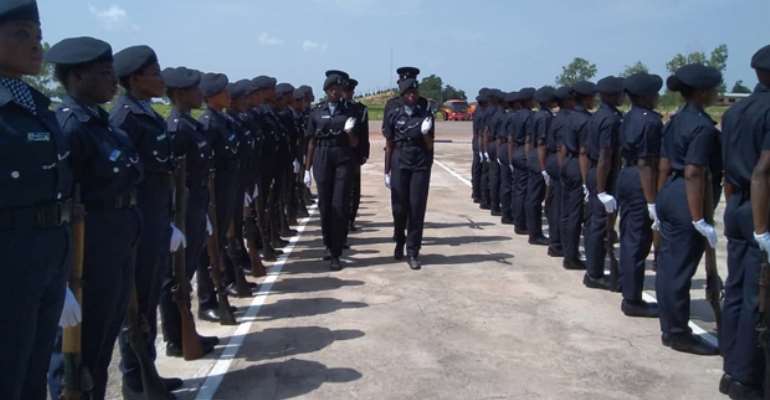 For the first time in many years, the female recruits who completed their training at the Police Public Safety Training School in Pwalugu in the Talensi District of the Upper East Region far outnumbered their male counterparts yesterday.

Out of the 173 recruits that passed out from training, a total of 120 of the recruits were females, with only 53 males for the Ghana Police Service (GPS).

Speaking at the passing out ceremony, Commissioner of Police, Alex Amponsah Asiamah, admonished the recruits to work assiduously and discharge their duties professionally to protect the integrity of the GPS.

He urged them to sustain the ongoing efforts by the GPS to improve on its relation with the public and win their trust.

“Once it is established that you are performing your duties lawfully and doing so professionally, you can be rest assured that the Police Administration will support you and commend you for your exemplary conducts,” he said.

COP Asiamah reiterated that the GPS was undergoing a transformation exercise to become more efficient and capable of delivering services in a peaceful and democratic manner and in line with international standards.

“The Police Service is focusing on enhancing the maintenance of law and order to protect lives and property through a well planned community policing and also getting the public closer to the police and effective interactions at all times,” he said.

The Deputy Upper East Regional Minister and MP for Zebilla Constituency, Frank Fuseini Adongo, charged the recruits not to become authorities unto themselves in the discharge of their duties.

According to him, the police have contributed to the maintenance of the peace and stability of the country, thereby giving the government and successive ones the peace and confidence to address problems and developmental challenges facing the country.