By Serge Daniel and Amaury Hauchard 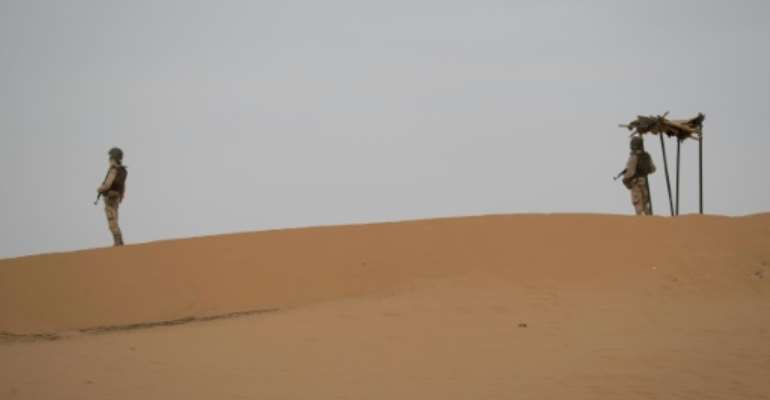 The attacks are major blow to the G5 Sahel -- a task force set up by five countries aimed at rolling back violent jihadism in the fragile Sahel (file picture). By THOMAS SAMSON (AFP/File)

Malian troops backed by foreign allies on Wednesday launched a hunt for scores of comrades listed as missing after one of the deadliest attacks in a seven-year-old jihadist insurgency.

At least 25 troops were killed after militants aboard heavily-armed vehicles raided two military camps at Boulkessy and Mondoro near the border with Burkina Faso, according to a provisional toll.

Fifteen jihadists, according to government figures, were killed in the raids, which began early Monday and were only quelled on Tuesday.

But around 60 soldiers are listed as missing -- 78, according to a security source -- with no details as to whether they have been killed or captured.

"Operations to secure the area are under way with Mali's partners," a Malian military source said.

"Our objective is to consolidate our presence in Boulkessy and to focus on soldiers of whom we are currently without news."

The losses are a crushing blow to Mali's armed forces, which are flailing in the face of a jihadist revolt that has spread from the arid north to its centre, an ethnically mixed and volatile region.

The losses symbolise "the escalating activities of violent extremist groups (in the Sahel) with more and more ambitious targets," said Baba Dakono of the Institute for Security Studies (ISS), a think tank based in Senegal.

Boulkessy is located in a gateway position in the centre of the country, controlling access from Mali to parts of Niger and Burkina Faso -- countries that are also heavily targeted by jihadists.

Armed groups "have no interest in letting a military force (in Boulkessy) consolidate its position," said Dakono.

Only 13 soldiers emerged unscathed from the attacks, which were eventually subdued with the help of Malian special forces and foreign allies, including French warplanes.

The jihadists also made off with a large quantity of arms, ammunition and equipment -- local media say about 20 vehicles were captured, including some mounted with machine-guns.

Other sources were unable to confirm this.

UN chief Antonio Guterres has been pounding the drum for help for Sahel states, among the poorest in the world, in their struggle against the mobile, well-armed and ruthless jihadists.

"We are losing ground to violence and terrorism," he said last week at a meeting on Mali and the Sahel, adding that the number of civilian deaths in the region had quadrupled between 2012 and 2018.

"The situation in the Sahel has become a regional threat," Guterres added, calling for an urgent increase in support.

On September 14, the West African regional group ECOWAS announced a billion-dollar plan to help fund the military operations of the nations involved. Full details will be presented at a summit in December.