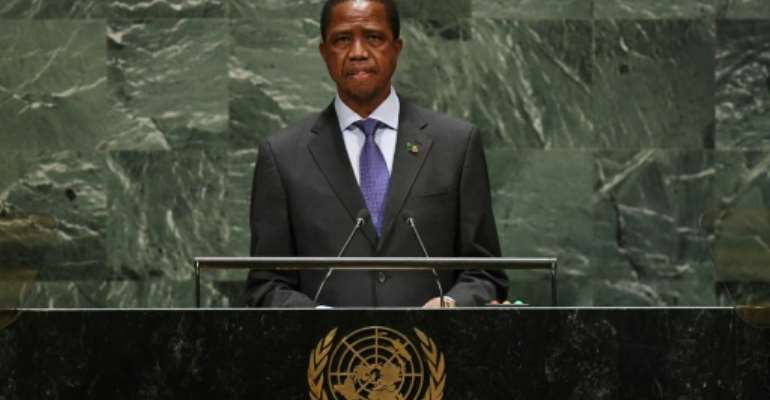 Critics say proposed constitutional reforms will give President Edgar Chagwa Lungu too much power and undermine democracy. By TIMOTHY A. CLARY (AFP)

Bill number 10 is to be discussed soon by parliament, where the ruling Patriotic Front (PF) holds a majority.

Lungu, in power since 2015, faces mounting complaints that he is cracking down on dissent and seeking to consolidate power.

If approved, the changes will allow the head of state to nominate judges and ministers, change the electoral layout and take control of central bank monetary policy.

"The bill is the grave digger of Zambia's democracy and the country's worst constitutional amendment since the achievement of independence in 1964," said professor Sishuwa Sishuwa from the University of Zambia.

The bill would "make it effectively impossible to remove President Edgar Lungu from office," he added.

Zambia has enjoyed relative stability since its first multi-party election in 1991, which ousted the country's long-running post-independence leader, Kenneth Kaunda.

Lungu then won the presidency in his own right in 2016 but the polls were marked by clashes between PF supporters and those of the rival United Party for National Development (UPND).

The president has since taken an increasingly authoritarian stance against his rivals, critics say.

Election runner-up Hakainde Hichilema, who refused to accept the results, was jailed for four months in 2017 for allegedly refusing to give way to a motorcade transporting Lungu.

Hichilema was held on treason charges, an offence that carries the death penalty. He claims his arrest was "political".

Tensions rose again last year, when the president successfully asked the constitutional court to allow him to run again in 2021 so as not to "plunge the country into chaos."

The opposition and civil society figures say this breaches the constitution which limits the president to two terms while Lungu, if re-elected in 2021, would in effect have served three times.

Musician Chama Fumba -- targeted for a song deemed hostile to the president -- and activist Laur Miti launched a "yellow card" campaign in July to fight against corruption and the proposed reform.

"Would you like a constitution with these provisions to be in the hands of a president you did not support?" Miti wrote in an article.

"Do you think this constitution would protect Zambians... against the whims of whoever happened to be in State House whether saint, devil or something in between ?"

'Process is going ahead'

The Law Association of Zambia (LAZ) has sued Lungu, his attorney general Likando Kalaluka and the entire national assembly for attempting to tamper with the constitution.

"This proposed bill is a project to put more power on the executive and disadvantage parliament," said US-based LAZ member Muna Ndulo.

The government is unfazed by their efforts and says LAZ is wasting its time.

"We know that there are some lawyers whose job is to seek popularity," spokeswoman Dora Siliya told AFP, adding that "the process is going ahead".

"We braved the storm to deliver the constitution and we mean every word we say," he told parliament earlier this month.

"Support the current process. If you don't want to refine it, we will."