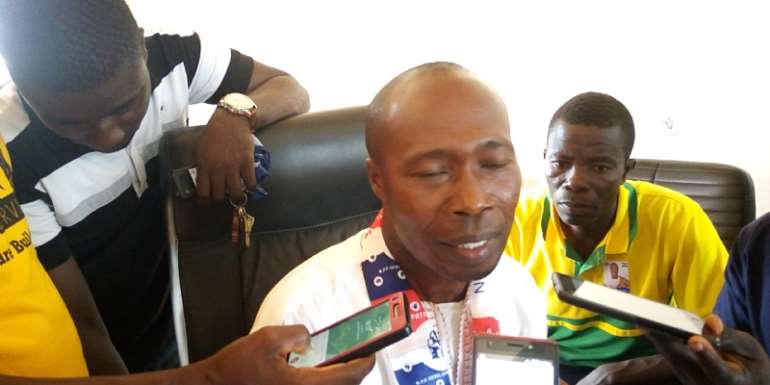 Some aggrieved members of the governing New Patriotic Party (NPP) in Ellembelle of Western Region have said, it is unacceptable for the party's hierarchy to disqualify Mr Joseph Apor Adjei aka Boin from contesting Ellembelle NPP parliamentary primaries without any tangible reason.

The New Patriotic Party (NPP) would conduct its parliamentary primaries in all orphan Constituencies in the country on Saturday, September 28, 2019 to elect its 2020 parliamentary candidates.

The New Patriotic Party (NPP) has not won the Ellembelle parliamentary seat before except on an alliance.

The seat is currently occupied by Emmanuel Armah Kofi-Buah, an NDC MP who annexed it in 2008.

The current District Chief Executive (DCE) for Ellembelle, Kwasi Bonzoh has been running unopposed for the NPP since 2012, but this time around, he is facing tight competition.

All four aspirants who picked forms to contest the primaries were subsequently vetted in Takoradi.

But, the National Parliamentary Vetting Committee of the party later disqualified the business mogul, Joseph Apor Adjei from contesting in the parliamentary primaries without any explanation.

Mr. Apor Adjei subsequently petitioned the party, but no reason was given to him for his disqualification.

But in a statement issued and signed by the Convener of Concerned Members of Ellembelle NPP, Sammy Enuson, copied to the media, the decision taken by the leadership of the party to disqualify Mr Joseph Apor Adjei was unacceptable.

The statement emphasized that the party has set a very bad precedent for the development of their party.

The statement disclosed that the disqualified aspirant has contributed immensely to the development of the party in the Constituency by building an ultra-modern office complex for the Constituency worth GHC300,000.00

RE: DISQUALIFICATION OF JOSEPH APOR ADJEI FROM CONTESTING THE PRIMARIES IN ELLEMBELLE

We are highly surprised to hear of the disqualification of Joseph Apor Adjei by the Executives (NEC, Vetting Committee and the Constituency Executives). We see this as bad precedent for the development of our party at the grassroot level since people who may be interested in the support of the party at that stage will not do that anymore. This is because looking at the enormous and immeasurable contribution of Mr. Joseph Apor Adjei to the party in the Ellembelle Constituency did not warrant such a bad treatment from the party.

Mr Joseph Apor Adjei since 2014 has paid his dues in full, he provided a fully furnished office worth over GHC300,000.00 to the party free of charge and huge financial assistance to both the party and party faithfuls. These kind gestures demonstrated by the man does not deserve a disqualification without a reason, we strongly believe it was a decision from the Constituency Executives which endorsed by the Regional Executives, Vetting Committee and National Committees, it is really unacceptable and we must not encourage these actions which can be inimical to the growth of our party.

In as much as we disgree with the decision, , we also want to express our profound gratitude to Mr. Joseph Apor Adjei for not taking the party down the lane of chaos and anarchy as seen in other parties. Clearly this shows your unflinching desire to see the NPP party in Ellembelle Constituency grow and capture the seat in 2020 general elections. The party says thank you and will encourage you to continue your good deeds for the party.

To the other aspirants who sailed through the vetting, we wish them good luck and assure anyone who will emerge victorious of our unflinching support towards elections 2020. But wish to advise them to devoid of issues and comments that is likely to cause complexity in the existing problems in the Constituency. We should always be reminded by past events that occurred during the election of polling station executives last year that caused our dear sister Fatima Issah popularly known as Fati from Kangbumli to lose her sight, Mr. Daniel Afful, Ngalekyi Youth Organiser, was stabbed in the palm and the party car that was destroyed by party faithful's and do our very best to prevent the reoccurrence of such incidence.

As Constituency our utmost priority is to win the Ellembelle seat and the presidential election come 7th December 2020 and not a mere parliamentary candidate and we can achieve this goal by hard work with peace, unity and love for one another. It is our wish that the delegates will take a meticulous and successful decision come September 28, 2019.