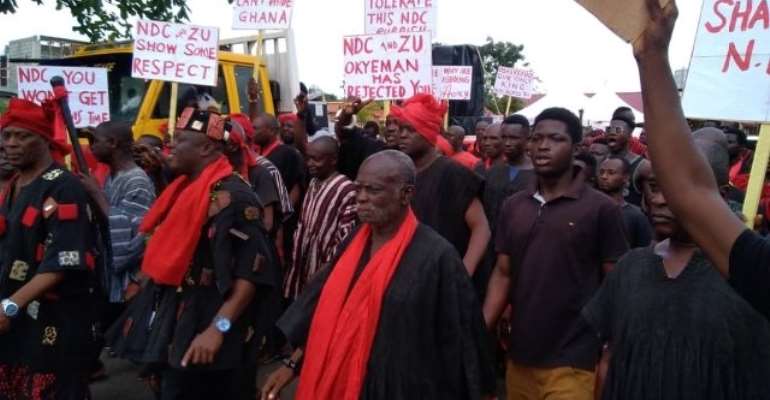 The chiefs and people paraded the streets of Kyebi on Monday over the comments.

The Akyem Abuakwa Traditional (Okyeman Council) has rejected a written apology by the National Democratic Congress (NDC) Secretary in the Ashanti Region, Kwame Zu over his bitter comments.

Kwame Zu said last Thursday that the people of Kyebi competed with animals until former President John Mahama provided water for its residents, despite the town being the hometown of President Akufo-Addo.

A news portal quoted Mr Zu as follows during an address to the pressure group, Coalition for National Sovereignty:

A huge demonstration ensued among the chiefs and people of Akyem Abuakwa, following the comments.

Demonstrators on Monday held placards showing their disapproval of the comment by the NDC executive.

Some of the placards read, “NDC and Zu, Okyeman has rejected you”, “This nonsense from NDC must stop,” among others.

The Ashanti Region branch of the opposition party quickly issued a written apology.

A statement of apology to the Okyenhene, Osagyefo Amoatia Ofori Panin II and the Akyem Abuakwa Traditional Council by Kwame Zu, sought to explain that on hindsight the comments that generated the furore were in fact unpleasant.

However, in a new twist, the Okyeman Council said it rejects the apology.

Chief Linguist to Okyenhene, Nana Kojo Antwi Bosiako, has told Accra-based Okay FM that the Council has heard that Kwame Zu has issued a written apology that has been published on many online portals, however, that is not enough.

"Some political parties are taking the Okyeman Council for granted and as a matter of fact, the Paramount Chief, Osagyefo Amoatia Ofori Panyin, which we will not allow as a council.

"The three days ultimatum still holds so we are urging the NDC leadership to come forward and render an unqualified apology and pacify themselves ritually before they can take up any campaign activity in the 942 towns and villages under the Okyeman Council," a news portal quoted him.

The Council has said in a press statement that within three days, the NDC must do the following:

1. Make a direct, clear and unambiguous public apology to the Okyenhene and Okyeman.

2. Make a ritual pacification to appease the Okyenhene.

3. Cause Kwame Zu to make a personal apology to the Okyenhene and follow up with a public recantation of the offensive words

4. Punish Kwame Zu for his comments.

The founder of the centre-left party, Jerry Rawlings, has expressed delight over a protest march that forced an apology from his party over unsavoury comments made by a Regional Executive.

“I'm glad the Okyeman citizenry bared its teeth enough to elicit an apology from the NDC branch responsible,” the former President wrote on Twitter.