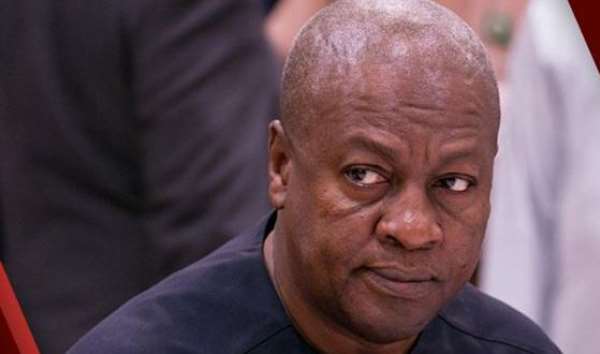 The flagbearer of the National Democratic Congress (NDC), John Dramani Mahama, has called for full disclosure on the government's role in the controversial Aker Energy deal.

The former President asked the Conference and Ghanaians query President Nana Akufo-Addo why the government would renegotiate a contract to the disadvantage of Ghanaians when there was low risk to the government.

“There was low risk in the Aker energy situation, so why would government reduce its stake by about 48% to 18%?”

The former President also observed that some of the key persons involved in the renegotiated Aker energy deal are linked to the Finance Minister Ken Ofori Atta.

He was speaking at a meeting with the Catholic Bishops Conference in Accra.

The meeting, part of the broad consultations initiated by the NDC to interact with stakeholders and key organisations ahead of the 2020 general elections.

Some civil society organisations like a policy think tank, IMANI Africa have already raised concerns with the deal.

IMANI Africa claimed that the country could be shortchanged by some 30 billion dollars if the contractual agreements are not reviewed; a claim that has been denied.

The Ghana National Petroleum Corporation (GNPC) and its CEO, Dr. Kofi Sarpong are currently at the centre of a lawsuit for handing over a 10% stake the country had in the Deepwater Tano Cape Three Points (DWT/CTP) oil block to Aker Energy, a Norwegian Oil Company.

In 2015, Explorco Ghana Limited, a subsidiary company of GNPC, acquired 10% interest in the DWC/CTP oil block at a time when HESS Corporation, the then operator of the DWT/CTP oil block, was offloading part of its stake in the block.

Parliament reportedly approved a budgetary allocation of $47 million for the acquisition.

The persons filing the suit contend that before GNPC could conclude the processes on the acquisition of the 10% stake, there was a change in government and with it came a change in the board and management of GNPC.

They argued that the new board and management of the GNPC was expected to conclude the acquisition of the 10% stake in the block “but failed to do so without any just reason.”

“The acquisition of the 10% stake would be beneficial to the country and sits well with principles of good public financial management and that the failure of GNPC to conclude this acquisition shall occasion financial loss to the State. It is the plaintiff's case that when the new board and management of GNPC assumed office, Aker Energy who had acquired the majority state in the HESS operated block, requested to take over the 10% Explorco stake in the DWT/CTP block, which request was granted by GNPC acting through the GNPC MD.”

The plaintiffs insisted in their writ that the said move “sins against the Petroleum Act, 2016 (Act 919)” and asked the court to overturn such decision.

Aker Energy has a 50 percent stake for which it submitted an unsuccessful $4.4 billion plan for development to the government for approval.