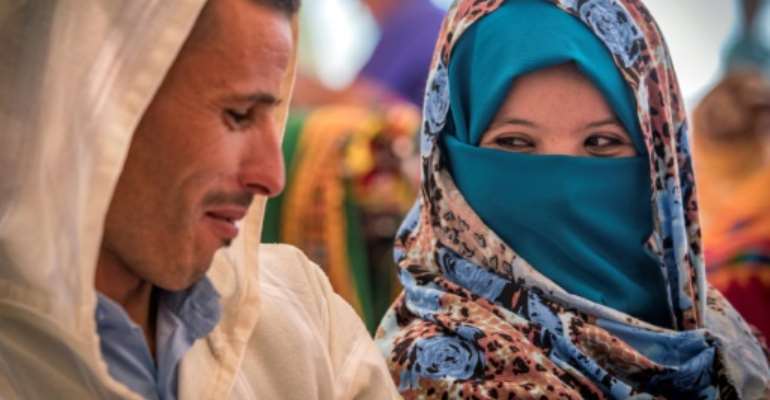 A young Amazigh couple smile at each other as they wait for their turn at a group wedding in Morocco's Atlas mountains. By FADEL SENNA (AFP)

High up in Morocco's Atlas mountains, three dozen young Berber couples gathered for a traditional group wedding to the sound of drums and ululating.

Near the lakeside village of Imilchil, hundreds flocked to attend the singing and dancing from last Thursday to Sunday under a bright blue sky.

A woman hands around wedding rings on a silver-coloured platter at a group wedding of young Berber couples in the Moroccan village of Imilchil on September 21, 2019. By FADEL SENNA (AFP)

They and their grooms waited patiently inside a large tent pitched over rocky terrain for a visiting religious man to legalise each union.

Dubbed the "engagement season", this ancestral custom of Morocco's Amazigh-speaking people was once intended to make peace between rival clans.

Among those waiting to wed, some looked nervous, while other couples exchanged excited glances. By FADEL SENNA (AFP)

"It's an ancient tradition and a very important event for the region," said organiser Lhousain Oukhatar.

But "the new generation doesn't care much about traditions", he said, missing the "radiance of years yonder".

Outside the wedding tent, men in white turbans and long hooded robes tapped their drums, as women dressed in flamboyant colours stood in a line, moving their shoulders from side to side to the rhythm.

Among those waiting inside to wed, some looked nervous, while other couples exchanged excited glances.

A woman passed around the wedding rings on a silver platter.

Once married, they stepped out of the tent to be greeted by loud ululations, before disappearing smiling into the crowd.

LGBTQI+ debate: Be tolerant of each others views — Akufo-Add...
39 minutes ago