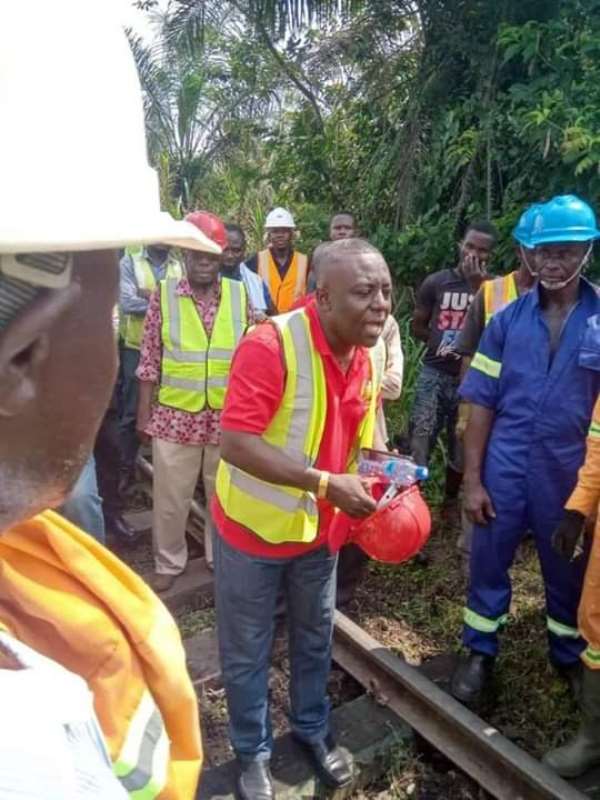 The Ghana Railway Company Limited on Tuesday, September 17, 2019, successfully carried out a test run on the Kojokrom to Tarkwa rail line.

Passenger service on the Kojokrom to Tarkwa line has been out of service from September 13, 2007. In January 2019 the GRCL took over the line for rehabilitation works as part of its first phase of rehabilitation of the existing narrow-gauge line with funding by Government of Ghana.

Deputy Managing Director of the Ghana Railway Company Limited Dr. Michael Adjei Anyetei in an interview said over 300 rail workers were involved in the rehabilitation works. According to him, they re-aligned the rail tracks, changed over thirty thousand sleepers and also undertook ballasting of the tracks.

Dr. Anyetei said their successful test run to Tarkwa was a positive move. He mentioned that the GRCL will have continuous test runs to ensure the safety of the line for commercial services. He assured the public that the Kojokrom to Tarkwa line will be fully operational in October 2019.

The 51km Kojokrom to Nsuta line is operational for only goods. It carries Manganese from the mines in Nsuta to the Ports of Takoradi for export. But this section also saw some rehabilitation works as it has not been in very good condition.

The Secretary-General of the Ghana Railway Workers Union, Godwill Ntarmah was happy with the level of work carried out by his colleagues. He applauded the Minister for Railways Development, Hon. Joe Ghartey for his selfless dedication and hard work to revamp the railway sector. He said workers of GRCL are ever ready to support H.E. President Akufo-Addo to realize his vision of living a legacy of a modern rail network.

The Municipal Chief Executive, MCE for Tarkwa-Nsuaem Municipality, Hon. Gilbert Ken Asmah was full of praise for the Akufo-Addo led Government. He said the come-back of the Kojokrom to Tarkwa train will change the economic fortunes of the people of the area and its adjourning communities. He assured the GRCL that the Assembly is ready to support them clear all illegal squatters who have defied orders to move, for safe train service.

Chief Director at the Ministry of Railways Development, Siisi Essuman-Ocran who represented the Sector Minister, congratulated the workers of GRCL for their hard work and dedication in supporting the Ministry to achieve its mandate. He said the Ministry has made adequate provision in the 2019/2020 budget to continue to support GRCL in their effort to strengthen the existing narrow-gauge lines, while Government is taking the necessary steps for the construction of the standard gauge lines, in line with the railway master plan.

The Ghana Railway Company Limited (GRCL) will carry out more test runs before the line is made fully operational.