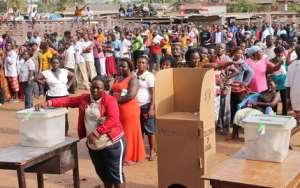 The National Commission for Civic Education (NCCE) and the Electoral Commission (EC) have launched a “Citizens’ Education and Awareness Raising Campaign” to educate the public on the upcoming District Level Elections (DLEs) and referendum for constitutional amendment.

The campaign would use strategies including; regional level lectures, community durbars, stakeholder meetings, focus group discussions, film shows, and sensitisation and awareness programmes in schools and lorry stations to educate people on the exercise slated for December 17, this year.

The campaign was launched in partnership with the Ministry of Local Government and Rural Development and the Information Services Department (ISD).

The referendum is expected to enable Ghanaians to elect Metropolitan, Municipal, and District Assembly Chief Executives (MMDCEs) into office on political party basis.

Hajia Alima Mahama, the Minister of Local Government and Rural Development, who launched the Campaign, said electing the MMDCEs was important as only a few people could present their grievances directly to the presidency unlike in the case of MMDCEs, as they developed factional relations with the people in their jurisdictions.

Local governance system, she said, was about development, hence the need for the people to play important roles in deciding who could work better to steer their progress.

She called on Parliament to amend Article 243 (1) of the Constitution, which called for approval from two-thirds of them to enable the EC to conduct an election exercise of MMDCEs.

She urged all and sundry including; traditional and religious leaders to support the process, especially with regard to educating the citizenry about the initiative and its importance to democracy.

Director of Elections at the EC, Dr. Serebour Quaicoe explained that the amendment was to legalise what was illegally done by politicians.

He reiterated that even though political parties wrongly sponsored their candidates secretly to contest the district level elections, the amendment was going to give them the legal opportunity to do that.

He disclosed that there were challenges with the local-level election and the worst of them were low turnout by electorates.

Another challenge was the low level of participation of women and Persons with Disabilities (PwDs) in the elections, he said.

Dr Quaicoe, therefore, encouraged all eligible citizens, especially women and PWDs to take an active part in the upcoming democratic activity to exercise their franchise and contribute their quota to the development of the nation.

The Chairperson of the NCCE, Josephine Nkrumah, said the NCCE conducted a research in 2014 on the “Effectiveness of District Assemblies” that revealed that 69.4 percent of respondents preferred that MMDCEs were elected, hence the initiative.

“We count on all registered Ghanaian voters and especially urged first-time voters who registered during the limited voters’ registration exercise, that in a spirit of self-management, active citizenship and good governance to turn out massively to participate in the district level elections and referendum on December 17, 2019,” she said.

Information Minister, Kojo Oppong Nkrumah in an address made on his behalf and the ISD, said the election of MMDCEs would empower citizens by giving them a bigger say in governance at the local levels.

He disclosed that the ISD was building the capacity of its staff on the use of Information and Communication Technology, especially social media to educate a larger number of the public on the initiative.