'Our future is not guaranteed': Ugandan climate warrior 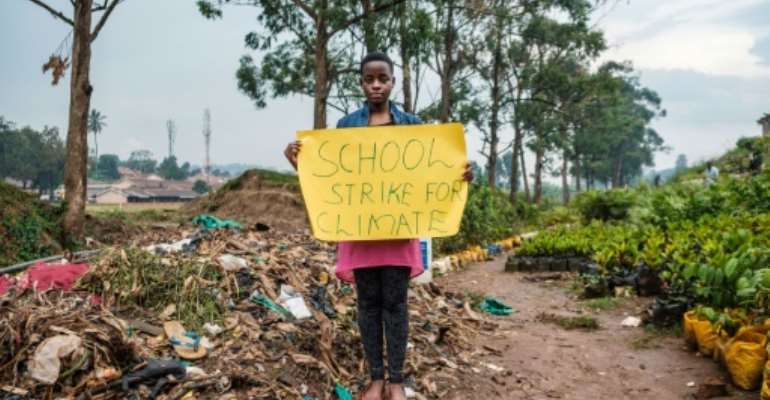 When Ugandan Leah Namugerwa turned 15 last month, she decided to plant 200 trees rather than have a birthday party, in her latest effort to spotlight environmental damage in her country.

Juggling school, protests, and giving speeches in regional capitals rallying for action to save the planet, she is one of a generation of youths inspired by Swedish environmental activist Greta Thunberg.

"If adults are not willing to take leadership, I and fellow children will lead them. Why should I watch on as environment injustices happen before my eyes?" Namugerwa said in the Rwandan capital Kigali last week, receiving a standing ovation for her address on the climate emergency.

Back in Kampala, she told AFP she was inspired to do weekly school strikes after becoming aware of her own government's "inaction" on environmental issues, and discovering Thunberg's sit-ins outside Sweden's parliament that led to a global youth movement.

Namugerwa was one of several activists with the Fridays for Future movement to receive this week Amnesty International's highest human rights award for their work.

Namugerwa, seen with her father and agent Lukwago Cephas, says some people have criticised her, telling her she should be at school rather than striking -- but her parents have encouraged her. By SUMY SADURNI (AFP/File)

She has led a campaign to urge Kampala to implement a ban on plastic bags blighting the country, and sounds the alarm about massive deforestation as well as prolonged droughts and flooding attributed to climate change.

She said young people "have to speak out."

"If we don't, our future is not guaranteed. The current leaders will be gone but we shall be there to suffer the consequences of their inactions."

The first time she held a protest for climate action was a Friday in February this year, on her own in a Kampala suburb.

"I felt I was doing the right thing and on the right track but to most people including some of my family members it looked to them as weird. They were glancing at me, shaking their heads in disbelief as I held my placards," she said.

Now a group of teens join her every week in missing school to hold their strikes on Fridays.

"Some people have criticised me. They say at this age and on Fridays I should be in classroom not on streets holding strikes. Good thing my parents have supported me. They have encouraged me."

Namugerwa -- who will take part this Friday in coordinated worldwide climate protests -- said she is heartened by rising interest in environmental issues in Uganda.

"Issues about climate change are not given the priority they deserve... but the debate is picking up now with our campaign."

Another teen activist who has joined her strikes, Jerome Mukasa, 15, said Namugerwa had opened the eyes of young Ugandans to the environmental crises in their country.

"Before the message on climate and environment was not clear to some us but Leah has simplified it to us, that it is real and a danger to all of us."