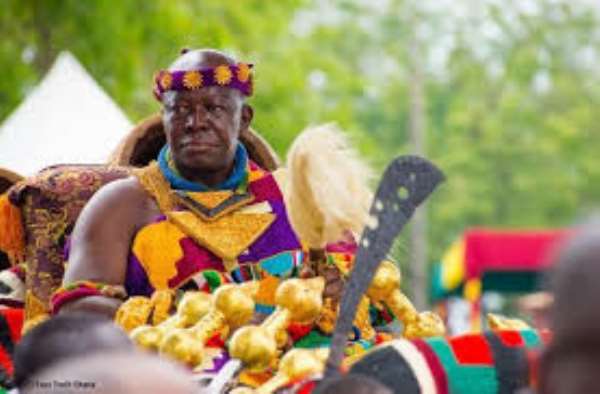 A group calling itself Ashanti Youth Association has described as malicious a statement issued by Julius Debrah former Chief of Staff on behalf of former President John Mahama to lampoon Otumfuo regarding his recent comments at the UN General Assembly.

According to the group, the statement has the tendency to bring the name and image of the Ashanti Kingdom into disrepute.

The Ashanthene, Otumfou Osei Tutu said at the UN General Assembly that the kingdom has in many ways contributed immensely towards peace and security of the country.

He emphasized that series of pre and post meetings in the 2016 elections were held with leaders of the two main political parties; H. E John Dramani Mahama and H. E Nana Addo Danquah Akuffo Addo which eventually had to pursue the former President John Dramani Mahama to conceive defeat after the election was declared.

But the former Chief of Staff in a statement said: “I state without equivocation that the decision to concede and congratulate Nana Akufo-Addo even before the official results were declared was taken by President Mahama himself without any persuasion from any quarter.”

This angered the Ashanti Youth Association to hold a press conference to that effect.

Speaking Okay Fm’s Ade akye bia, General Secretary for the Association Kweneboa Kuduah said the statement is malicious with a deliberate intent to disrespect the Ashanti King and that is demanding a retraction and further apologize to the Ashanti King.

Nananom, Our able Practitioners from the media, ladies and gentlemen. We deem it an enormous privilege to have met your huge attendance here, even though you were served a very short notice. We are indeed grateful to you all for making your presence felt here.

Today, we have convened here to bring to your notice or attention our thought on the aftermath on the historic speech by Asantehene Otumfuo Osei Tutu II at UN, as we were thinking of how State Media went silent on it, we were shocked to our bone when about derogatory statement made by One Julius Debrah(Former Chief Of Staff) and One Dr. Omane Boamah(Former Communications Minister) seeking to suggest that the King "lied" in his address to the UN.

An official statement issued from the office of the former President through Julius Debrah on Sunday September 15th,2019 in response to His Royal Majesty Otumfuo Osei II roles he has played during Handing Over of political power from one administration to the other, Since he ascended On the Golden Stool(Sika dwa).

If the disrespectful Julius Debrah, claim the king "lied" we have these two questions for him to answer.

a) If Asantehene has not played any intermediary role, Why did Former President Mahama Copy Asantehene in an official letter dated Tuesday, January 10th, 2017 about his *Official Residence and Office*?

First Paragraph of the said letter reads "I refer to our agreement on the above subject matter and wish to inform you that, i have decided to formally withdraw both request"

- In whose presence was the agreement reached and why did he copy Santehene if he was not the mediator ?

b) Again, if he accepted willingly, why was the need for about two more meetings held among Asantehene, HE President Akufo Addo and Former President John Mahama even after the declaration of results by EC.

Julius Debrah's disrespectful response to the King is against what customs and courtesy demands clearly shows his arrogance and lack of respect.

Also, KuYA has chance on some distasteful tweet and comments on whatsapp by One Dr Edward Omane Boamah as a result of Statements release by Julius Debrah from the Office of the Former President. If that was the stand of Dr Omane Boamah, we again pose this question to him;

*why didn’t he, Dr Omane Boamah or any other person respond to this same statement when Otumfour Osei Tutu II previously made it in Kumasi, but decided to respond when it was reiterated at the UN session*?

These comment by Dr Omane Boamah is seen to me uncouth and demeaning.

The Patrons, Executives, and entire membership of KuYA write to establish our disgust by politicians who for their selfish interest would want take the shine of the powerful speech Asantehene Otumfuo Osei Tutu II gave at the just UN session.

The Asante Kingdom has been in existence in glory for ages, and we shall stand by our identity and heritage for the interest of Asanteman into eternity. We therefore would not succumb to personalities who will seek to malign our Kingdom.

If people are blinded by politics to the extent of speaking lies against Asantehene, they should know that Otumfuor the Asantehene is the embodiment of our glory and respect around the world as a people.

We also want to caution all political parties to refrain from dragging the name of the King into disrepute and accord the Asantehene and the Asante Kingdom the respect and honour it deserves.

We hereby challenge the former President of Ghana, HE John Dramani Mahama as a statesman to come out clear on the release issued by Julius Debrah.

Finally,We also call on the hierarchy of the NDC to call these personalities to order and we strongly demand an unqualified apology from Dr Edward Omane Boamah and Julius Debrah within 7 days without delay. We would ban them from entry into palace under the jurisdiction(Any traditional that swear allegiance to Asanteman) and deal with them ruthlessly if they fail to do so.

Thank You For Coming