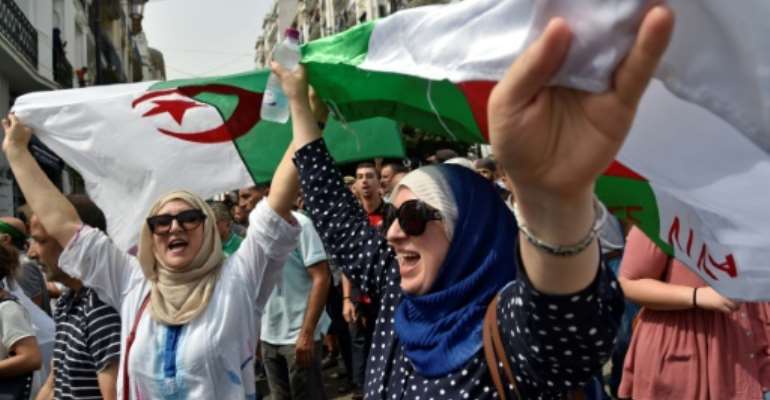 Algerian demonstrators have been staging mass rallies since February. By RYAD KRAMDI (AFP)

Protesters massed in the Algerian capital on Tuesday to demand the cancellation of a controversial presidential election planned for December 12.

Interim leader Abdelkader Bensalah announced the poll on Monday in a bid to resolve the political deadlock gripping the country since the April resignation of longtime president Abdelaziz Bouteflika.

But activists have demanded political reforms and the removal of Bouteflika loyalists including powerful army chief Ahmed Gaid Salah before any vote takes place.

Led by students, protesters on Tuesday shouted slogans against "the gang" and demanded: "Hey Gaid Salah, forget the elections!"

The general, who has become a key powerbroker since Bouteflika's departure, has led the push for polls by the end of the year in keeping with the constitution.

But Hamid, a 57-year-old public servant who took part in Tuesday's protest, insisted that would not happen.

"We will cancel the December 12 vote just like we cancelled the July 4 election," he said.

After Bouteflika resigned in the face of mass protests in April, presidential elections were called for July 4.

However the vote was postponed due to a lack of viable candidates, leaving a political vacuum in the North African country.

"If Gaid Salah wants to go against the will of the people, we will demonstrate on election day to show that the people don't support the vote," Hamid said.

Protesters have held mass rallies every Tuesday and Friday since 11 February, calling for key regime figures to step down.

"Students represent the majority of voters and we will not participate" in the election, said Samia, a law student at Tuesday's demonstration.

"We will stay mobilised until our demands are met: the removal of all representatives of Bouteflika's regime before any election," she added.

Police detained at least 10 protesters in central Algiers and confiscated mobile phones of people who filmed the arrests, according to an AFP journalist.

Samia said: "How do they expect us to participate in a democratic election when they keep arresting protesters and activists?"