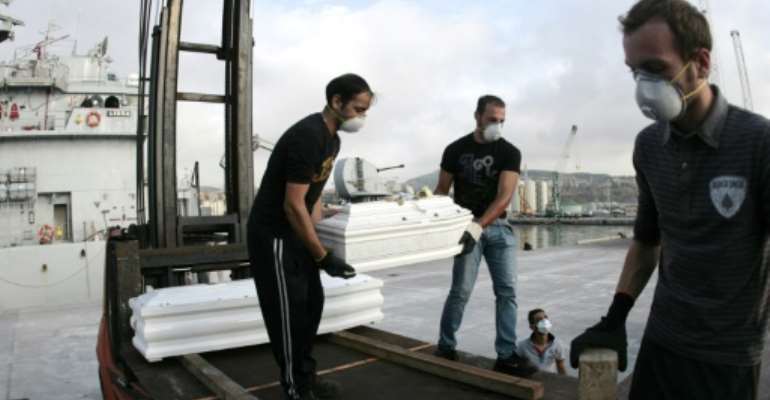 The Italian patrol boat Libra arrived too late to save many of the migrants. By MARCELLO PATERNOSTRO (AFP)

Two Italian officers accused of delaying the response to a 2013 shipwreck in which some 260 migrants drowned will stand trial for manslaughter, a court in Italy ruled Monday.

Dozens of children died after repeated SOS calls were ignored ahead of the October tragedy, which sent a shockwave through Italy.

The country was already reeling from the deaths just a week earlier of 366 migrants who drowned off Lampedusa.

The trial of Leopoldo Manna, head of the Italian coast guard operations room, and Luca Licciardi, the equivalent for the navy, will begin on December 3 in Rome.

The fishing boat had set off from Zouara in Libya under the cover of darkness with nearly 480 people on board.

It was in Malta's search and rescue zone, 118 nautical miles south-west of the Maltese capital Valletta, when it ran into trouble at 12.39 pm on Friday October 11, 2013.

Images and recordings from the tragedy were made public in a 2017 documentary.

The migrants -- Syrians and Palestinians -- can be heard appealing to Italian officials, but they ordered them to call Malta instead.

Valletta insisted Rome should deal with the emergency because the boat was only 60 miles off the Italian island of Lampedusa. An Italian patrol boat, the Libra, was also just 45 minutes away.

At around 4:00 pm, a Maltese reconnaissance plane spotted and filmed the boat, and tried to alert the Libra, without success.

Back at the command centres, Valletta and Rome were at loggerheads, with Malta urging Italy to send the Libra to the rescue.

On both sides, the voices heard in the audio recordings are calm until 5.07 pm, when Malta announced: "The plane has seen the boat capsize, people are in the water."

The Libra set off towards the stricken boat, arriving just before 6:00 pm to cries of panic. Twenty-six bodies were recovered that day, while 240 people were never found, including around 60 young children.

In the days that followed, Italy's centre-left government launched a vast search and rescue operation between Sicily and Libya dubbed "Mare Nostrum", which would go on to save over 100,000 people in a year.

The Libra was often on the operation's front line and its commander, Catia Pellegrino, the first woman to command an Italian military vessel, was awarded a presidential medal of honour.

Two investigations into manslaughter and failure to assist people in danger were launched against Pellegrino and several Italian officers, but were later dismissed.

Mare Nostrum was replaced at the end of 2014 by the EU's border agency Frontex.

The EU in 2015 launched Operation Sophia to tackle people smuggling, but the Italy-based military operation has since shrunk from a naval deployment to a few spotter planes and drones.

Italy's new government, a coalition between the anti-establishment Five Star Movement (M5S) and the centre-left Democratic Party (PD), has appealed to its European allies to help it shoulder migration from Africa.

His decision to wage war on the charity ships that rescue people in the Mediterranean saw the number of arrivals in Italy drop dramatically, but critics warned that many migrant boats may simply be sinking into the sea without a trace.