C/R - So sad: JHS graduate commits suicide; poverty cited as the cause 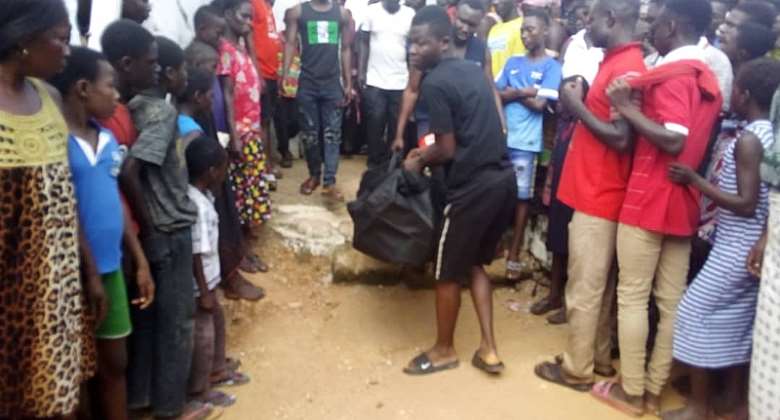 A 15-year old Junior High School graduate is reported dead at Agona Asafo in the Agona East District by suicide, joydaddymultimedia.com can confirm.

The deceased, Isaac Arhin, popularly called Yaw, is said to have taken his life due to a decision by the family for him to learn a skill instead of attending Senior High School.

The sister of the deceased, Georgina Buabeng narrating the ordeal Indicated, the deceased came returned from Tema last three days where he was staying with his aunt without even informing them of his journey.

"Yaw told me he got aggregate 20 and that, he has gotten a school at Kwahu Tafo but his aunt wanted him to learn a skill instead of continuing his education because she is not financially sound to support his education".

"I told him, his mother had gone to Volta and that, he should exercise patience for her to return so we could deal with the issue, as I am also not in a position to support his education due to my poor health condition" she told the reporter.

"He left the house about 6am in the morning without informing me, so I called to find out where he has been after complaining earlier of being hungry. He told me he had gone to my aunt's place at Nsuaem".

"Unfortunately, I returned home to find out that he had locked the door to our room so I called him severally without any response. I then decided to look through the window with the help of a neighbour and unfortunately, I saw him hanged to death with a rope" Georgina Buabeng revealed.

The Assembly Member for Agona Asafo Electoral Area, Robert Abeiku Ansah on his part attributed the action of the deceased to the family's inability to proper deal with the issue leading to the death of the boy.

He, however, advised parents to counsel their children on how to handle issues especially with the ongoing SHS placement system to avoid such horrific instance.

Meanwhile, the body of the deceased has been deposited at the morgue as the police has instituted investigations into the matter.

Retract, apologise for accusing me of impersonating Adwoa Sa...
29 minutes ago

W/R: Our school has become a sleeping place for madmen, big ...
38 minutes ago