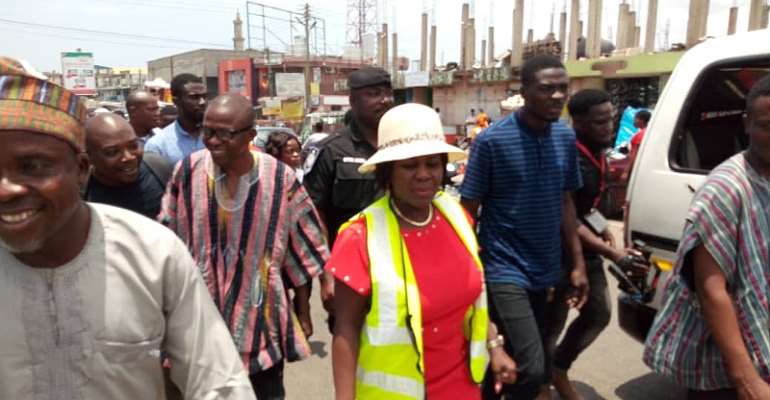 The Minister for Sanitation and Water Resources, Hon. Cecilia Abena Dapaah has today, September 11, 2019, toured the Ayawaso East and North Municipalities to inspect how communities are adhering to efforts being made to keep the various towns clean.

The Ministry is one sector being closely monitored by President Nana Addo Dankwa Akufo-Addo whose aim is to make Accra the cleanest city in West Africa by the end of his first term.

In line with that, Hon. Cecilia Dapaah has been working closely with all leaders of the various municipalities in the capital city to implement policies that will make the realization of that goal possible.

She was accompanied by teams from the camps of Hajia Salma and Alhaji Aminu Zakari ‘MZ’ who are the MCE’s for Ayawaso East and North Respectively.

Hon. Cecilia Dapaah led the tour from the Nima Market, through the community whiles visiting numerous households and businesses. From there the entourage paid a courtesy call on the leader of the Council of Muslim Zongo chiefs, Sariki Moro Baba Issah.

He pledged to continue working together with members of his community to ensure they keep their surroundings in good sanitary conditions whiles appealing to the Minister to address their long-term drainage system problem for them.

Hon. Cecilia Dapaah thanked the Chief and his people for keeping their community clean and moved on with her team to continue the exercise through the Mamobi Market.

Amongst many other things, today’s tour focused on how the citizenry is embracing the one bin, one household initiative as well as the call on every house to have its own toilet facility.

Interacting with the media at the end of the day, the Minister for Sanitation and Water Resources stressed that President Akufo-Addo is counting on every Ghanaian to make his dream of making Accra the cleanest city in West Africa possible.

She further shared that she is delighted with how the people living within the Ayawaso East and North have adhered to the various policies implemented in ensuring that those communities are cleaned up.

“I am particularly elated because of the goodwill the citizenry is showing towards this ‘keep the country clean, especially Accra’, the clarion call from His Excellency the President”, Hon, Cecilia Abena Dapaah noted.

Following hours of trekking under the hot sun, the team later conveyed at the Ayawaso North Municipal Assembly office to end this week’s two-day tour.

Similar tours are expected to be carried out in some other municipal assemblies in subsequent months.