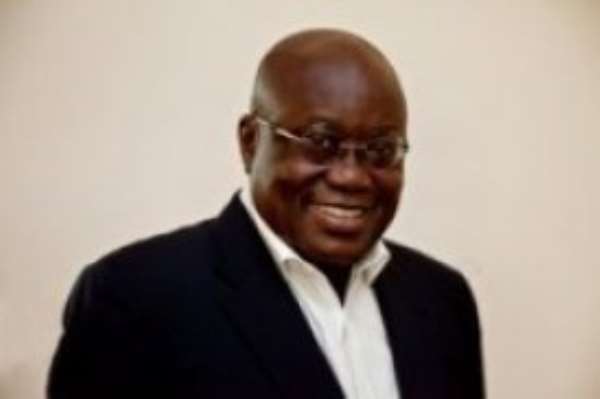 Mr. President, we have carefully followed your government's argument, through its Local Government and Rural Development Minister, reiterating on various forums that a referendum leading to the amendment of Article 55

(3) of the Ghana Constitution will be held alongside the district Assemblies elections by the end of this year. The article, which is an entrenched provision in the constitution states that, "Subject to the provisions of this Article, a political party is free to participate in shaping the political will of the people, to disseminate information on political ideas, social and economic programmes of a national character, and sponsor candidates for election to any public office other than to the District Assemblies or lower local government units".

At the recent forum held under the theme: "Electing MMDCEs for Improved Local Decentralisation and Good Governance", which was aimed at sensitising the representatives of the various political parties about the proposed amendment to the entrenched article, the Minister emphasised again on the fact that the proposed amendment is critical if the MMDCEs are to be elected on a partisan basis through the universal adult suffrage system. The Minister went further to state that, "A draft bill for the amendment of the article has already been approved by your Cabinet and sent to the Speaker of Parliament who has also assented to it, and sent it to the Council of State for advice. That, the Council of State has also given its advice and the Attorney General has since gazetted the Bill". This illustration actually depicts the background as to how far the process to allow the elections of MMDCEs has gone.

Mr. President, though it appears the process to fulfil the NPP 2016 manifesto pledge has reached almost irreversible state, but we see huge problems with the idea for yours and the future governments, and we believe that it is not too late to exercise your prerogative as the President of the nation, to halt this amendment, looking at the reasons pointed out below.

Some Ghanaians have factually argued that the election of the MMDCEs isolates the President from the controversies and temporary pressure which usually characterises the appointments of MMDCEs. Others have also argued that, the purpose for which the constitution made that provision has been defeated because it has become counterproductive as the ruling parties have usually nominated people who lack the competence required to run the assemblies. Therefore some have also called for the 30 percent appointment of members who are supposed to be technocrats and professionals to the Metropolitan, Municipal and District Assemblies (MMDAs) by the government to be scrapped.

But Mr. President, the fact remains that the framers of the constitution envisaged the need to build the country on consensus irrespective of our fierce political divide, since politics does not provide all solutions to nation building, therefore an opportunity was created to afford the elected President to appoint technocrats and professionals such as teachers, engineers and specialists who may not like to stand for rigorous elections to bring their expertise to bear on the assemblies. However, a distinct fact also is that, we have witnessed situations whereby the ruling parties have appointed their party members who lack the competence and knowledge unto the assemblies, and by so doing, have politicised, abused, and deviated from the core purpose for which the constitution made that provision. Mr. President, the question we would respectfully like to ask is, 'how does the proposed partisan election of the MMDCEs and Assembly Members seek to fulfil that purpose and improve the current system'?

Another question we humbly like to ask is, 'do we have to cut off our legs if your child defecates on them, as Ghanaian adage goes'? We believe that the soiled legs only need cleaning, and the child is appropriately educated in its upbringing. Identifying the deviation and abuse of this important provision in our constitution which allows for professionals and experts to be hired, we suggest that, what was needed to improve the system was to introduce comprehensive stringent minimum criteria for any nominee to the

Assemblies to meet the criteria in order to fulfil the purpose of the said provision in the constitution. As we know, partisan politics has not been the only solution for everything in most advanced democratic countries.

We contend that, introducing partisan politics at the Assembly Membership elections would undoubtedly create sharp division at the grassroots in our communities and will not help to maintain harmony among the local people despite the fact that it affords the people the platform to choose who governs them locally. We believe that, the political factionalism at the grassroots will destroy friendships and families, considering our fragile young democracy.

Mr. President, there is also no concrete evidence which clearly suggests that the proposed election of the MMDCEs will actually improve on the current system, rather, the demerits identified below with this partisan idea are too weighty to ignore.

Mr. President, we respectfully urge that the Minister for Local Government and Rural Development should take the responsibility to help Ghanaians understand the following:

Mr. President, we can cite examples of the UK Prime Minister Cameron's decision to allow the public to decide on the Brexit through public referendum The outcome of that referendum which the UK public was allowed to decide for the government to remove the country from the European Union has ended up as an albatross on the neck of UK government in the past three years, all just by a single decision when the Prime Minster underestimated the power of the public votes. We can also cite the example of the decision taken by Prime Minister Theresa May, when she hurriedly called for general elections with the aim of getting the public endorsement through votes for her premiership, at the time that she already had majority of MPs. By that decision, the Prime Minister ended up with a minority of MPs after the general elections, making her government weaker than ever before.

Mr. President, we are of the view that, the current system which allows you to appoint the MMDCEs can achieve the purpose for quicker development of our communities if the country can rather infuse in the Local Government Acts some puritanical criteria for the nominees to the MMDAs to meet before appointment through qualification assessment, in order to achieve the purpose of obtaining professionals, technocrats and competent people to MMDAs, even if the incumbent parties choose to appoint only their party members.

Mr. President, We therefore humbly submit that, the elected President of Ghana must be allowed to have the powers to appoint the Commissioners, Ambassadors, CEOs, MMDCEs, High Commissioners, Regional Ministers etc. We believe that the political activities are the country are way too much and making the MMDCEs and District Assemblies to be elected on partisan basis will make it worse.

We also advice that, the position of the appointed professional Assembly Members must no longer be on part-time basis, in order to attract technocrats and skillful professionals, to help address the challenges with the mobilisation of revenue at the local level as well as sorting the involvement of traditional Chiefs, whiles seeking to introduce right technology to improve on service delivery at the local assemblies. We believe that, this will ensure the proper functioning of the MMDAs.

We submit that, reducing the Presiding Membership positions at the MMDAs to a partisan election will not achieve the purpose since the people who occupy those positions ought to be competent and experienced to deliver on development of the areas.

Mr. President, we have come to you with this petition based on concerns expressed by some indigenous members of the NPP, some government officials who are very skeptical about the partisan idea but can't talk, comments heard from ordinary Ghanaians and our personal anxieties about the idea. We therefore pray that, you reconsider the exigent issues raised herein, the suggestions professed, and hope that you rescind the decision on the partisan election of the MMDCEs and District Assemblymen.