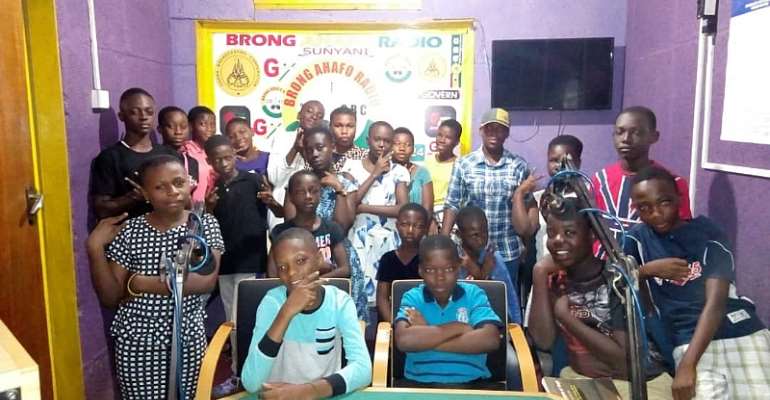 "Mr. President, why have you placed priority on the Senior High, to the neglect of the Basic side?"

This has been the simple question a kid on the Radio BAR's Children's Corner programme who responds to the name Anna asked the President of the Republic, Nana Addo Dankwa Akuffo Addo.

The award winning programme, that comes to listeners on Saturdays between 08:00 and 09:00 GMT, and is hosted by Florence Nightingale Asieduaa Boafuor, who was mentored by Princess Agnes Boakyewaa Minta, never ceases to thrill listeners. It's not surprising then that all the royals in the Goka kingdom sits by the coffee table every Saturday and lock their dials on 93.5MHz and follow every bit of the good packages that comes from the host and the empanelled kids.

On the very day under discussion, the 7th day of the month September, in this very year 2019, the host, who affectionately responds to a nickname "Queen Flory", had finished reading a story titled: "Life is How You Make It".

Not that I just listen to the programme, but the most part I enjoy is the story time.

And on this particular day, the title of the story fell in line with the philosophy I grew up with.

The Basic school I finished, Rapid Preparatory School in Sunyani, my year group made the same title our motto, and it was boldly written at the back of our ceremonial T-Shirt.

Florence Nightingale (the host)
Thinking I'll have my life story in what Nightingale will read in the story chosen, I must confess I had more than enough.

Though in my case, I've not attended school in a dilapidated building as the hero in the story read, Owusu.

Owusu who was described as a son of poor parents from a village was exceptionally brilliant, but taking him to school and be provided with what he'll be needing for his education became a nightmare for his parents.

Then the much awaited Free Senior High school came to their rescue.

Knowing his books, tuition and uniforms would be paid by the government, Owusu learnt as if his life depended on the books. He passed well and was admitted to a university, winning scholarship and coming out as the best student of his year group.

It was worth it how Owusu toiled to make it through his Masters, and inching towards his childhood dream of becoming a judge.

After being awarded with a medal by the university's vice chancellor as the best student, the smallish Owusu with big brains forgot his struggles as one who even at a time worked in a restaurant to have money for photocopies and pamphlets. His success erased from his mind how he'd salivated on the sumptuous meals his mate's parents brought on the days opened for visitors, something his own parents never did.

Indeed, Owusu's success is befitting for the title chosen: "Life Is How You Make It".

The kids on the programme enjoyed the story, and the listeners at home, myself included, who one way or the other is linked to the story embraced it, and said to ourselves that: " we've not spent our time on something worthless, listening to the Children's Corner programme ".

After Queen Flory asking questions on the script read, as done always, she opened the floor for questions from the kids, which was unusual on the programme.

The first question, as seen in the preamble, in the beginning of this writeup, ended the many questions the kids were to ask.

Anna, whose question was backed by all the kids, one Chatty in particular, had been directed at the president.

She wondered why past and present governments would prioritise and care much about those in the second cycle and the tertiary institutions and barely do so for those in the Basic side.

Anna
My first response to the young girl's question was " wow, what a brilliant kid with a brilliant question?"

Yes, Mr. President, the kid, Anna, is not speaking, as Jesus told his disciple Peter: "you're not speaking from your mind, but it's the holy spirit that directs you".

Look, Mr. President, visit the village schools, go to the government owned schools, the Basic ones, those you want pass their exams and enjoy your Free Education, your pet project.

Not only are they sitting under trees, or in dilapidated buildings, making the bare floor/ground their seats and tables; but they don't have well trained teachers too.

You've had the benefit of travelling around the world, and check it, apart from Africa, Ghana in particular, where do you see Middle School leavers, Senior High school leavers and untrained teachers teach those in crèche, nursery, kindagarten and primary schools?

The advanced countries, those we envy for their productivity, the golden example being Germany, would never even employ a first degree holder to teach their toddlers.

So, why is it that it's different in our case?
Does it mean our leaders care less about the future of this country Ghana, or it is a manipulation by the neocolonialists who don't want us to reach where they are, making us perpetual slaves to them?

Today, the heavens have spoken through the kids on the Children's Corner programme, if you want to maintain your position, take a sacred look at their petition and respond accordingly.

They are the future of this country, and if what they petition now is swept under the carpet, they will have no option than to march alongside the revolution soldiers that will blush you aside and build for better the fallen walls of our country, and make Ghana great again.

Don't forget it that you're not the first leader in Africa to seem giving "Free Education" to your people. Zimbabwe under the just demised Comrade Robert Mugabe had it. The international media touts them as the most lettered populace in Africa. Yet, what do we see reflecting on their economy? The foundation was not right. They've only learnt to read and write, but the country is caving in economically. It could be linked to economic sanctions.

But, Sir, Mr. President, a word to the wise is enough.

Forget not that soldiers of the revolution are the ones amplifying the petition of the kids to you. They have in them souls that are dedicated to erecting the best foundation for Ghana and Africa.