Minority boycott of Parliament no end in sight 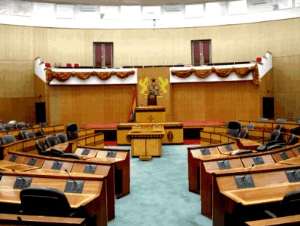 Accra, Feb. 20, GNA - There is no immediate end in sight to an indefinite boycott of Parliament by the Minority for the Representation of the People (Amendment) Bill (ROPAB), as the Minority says the President and Speaker are yet to react to their protests on the issue. The Minority told the GNA on Monday that although it had made its position on ROPAB clear to the President and the Speaker they had not received any response from President John Agyekum Kufuor and the Speaker, Mr Ebenezer Sekyi Hughes. It was, therefore, unfair for the President and others to tell them to go back to Parliament to debate the bill.

President Kufuor on Thursday asked the Minority to reconsider their decision to boycott parliamentary proceedings and to return to the floor of the House to debate issues relating to the Representation of the People Amendment Bill (ROPAB).

Mr Kwabena Agyepong, President Kufuor's Press Secretary, told a Castle briefing that it was the view of the President that as representatives of the people they should debate their concerns with their counterparts in the House.

The impression should not be created that there was a controversy and that it was important that all should exercise restraint and respect each other's views. Tolerance and accommodation were the only way to move Ghana's democracy forward.

However, Mr John Tia, the Minority Chief Whip, in an interview with the GNA in Accra, said it was not right for President Kufuor to call on them to go back to Parliament when neither he nor the Speaker had reacted to their position.

The group said their recent disengagement from parliamentary business was a formal protest directed at the Executive and the Legislature to draw the attention of the two to their opposition to the passage of the Bill.

The Minority at a press conference on February 9, served notice of their decision to boycott Parliament over the "wanton and flagrant disrespect for Minority rights.

"This boycott is precipitated by the unprecedented referral to the Privileges Committee of a letter written for and on behalf of the MP for Avenor-Ave, Mr Doe Adjaho, by his counsel, seeking respect for the Constitution and laws of Ghana," Mr Alban Bagbin, the Minority Leader, told Journalists at the press conference.

"The other factor is the determined effort of the Majority to bulldoze the ROPAB through Parliament, notwithstanding opposition from other political stakeholders and sensible advice from civil society." Mr Tia said he was surprised at the "lack of concern" shown by the President and the Speaker over their protest.

"We are surprised.... we are the victims and seeking redress and they are not doing anything," he said.

Asked whether the Minority, as a group in Parliament, had taken the trouble to formally write to the Speaker seeking redress, instead of just registering their protest through a boycott announced at a press conference, Mr Tia said Parliament was not being run like the civil service.

He said they had adequately sent a notice through the press conference to all including the public and, therefore, there should have been some sort of reaction from the Executive and the Speaker. The Minority has followed up their protest by calling on the Christian Council to put their case across to the President.

President Kufuor has already held closed-door discussions on the Bill with the Christian Council. The Council has sought explanation of the rationale behind the ROPAB that had generated so much political heat in the country.

Thousands of Ghanaians last Tuesday poured onto the streets in Accra to either take a glimpse at or participate in a demonstration against the passage of the Representation of the People Amendment Bill (ROPAB).

The peaceful protest march was to back their request for the withdrawal of the Bill, currently before Parliament.

The more than six hours' march was organized by Concerned Ghanaians, a pressure group, with support from the Minority parties including the National Democratic Congress (NDC), the Eagle Party, the National Reform Party (NRP), the Great Consolidated People's Party and some civil society groups.