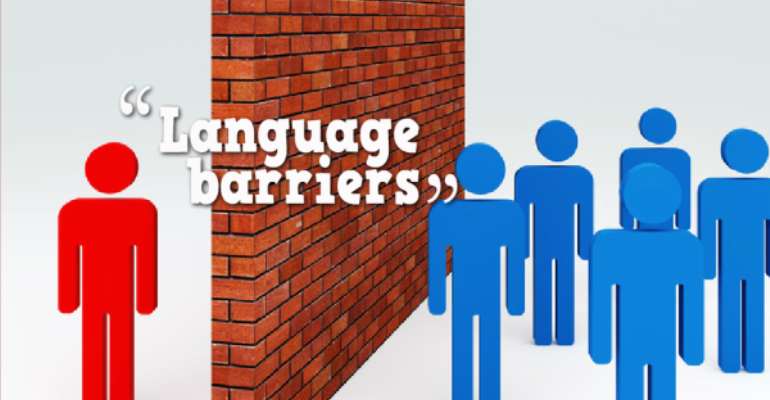 Ngugi wa Thiong’o once noted that a language any language has its social base in a people’s production of their material life – in the practical activity of human beings co-operating and communicating in labour to wrestle with nature procure their material means of life – food, clothing and shelter.

A viral video of a man and a hunter by a highway who could not communicate with each other due to language barrier is the basis for this piece. In that video, the man who wanted to buy some game that the hunter had killed spoke in English while the hunter who couldn’t speak English responded in ‘Twi’. While the supposed buyer was asking how the animal was trapped and killed, the hunter and those around were talking about how the price of the animal could be reduced as well as dressing it for the buyer. After an exchange of inabilities to communicate in each other’s language, the buyer rode off.

As he rode off, he said, “woaw, oh my goodness, you see, the people who are known to understand a little bit of English Language were also saying something different. This indicates that education is so important, people need to learn simple things like reading and writing. If you get people to interpret language and they lie about everything then you know what you are getting yourself into.”

Ghana upon gaining political independence adopted the English Language as its official English due to the relationship we had with the British. There were debates in the first parliament on the choice of local language that was supposed to be chosen. Unfortunately, the English Language carried the day.

As a nation we have scored low marks in developing a language policy that promotes our local languages on all fronts. While the world is getting globalised by the second, we can also ensure that our indigenous languages should be well developed and promoted.

One will argue that the reason for our inability to score high marks at developing indigenous languages is the nature of our diversity. This diversity should be turned into some great opportunity. For instance, while some foreign languages are learnt at some public universities, there can be a policy that all first years in any public university should study one or two local languages – it could be one’s native mother tongue and another indigenous language of Ghana. This could bridge the gaping diversity.

Once again, Ngugi wa Thiong’o noted that to choose a language is to choose a world. This is very true. We can choose a world for ourselves and ensure that our local languages are worldly recognised. When the formally educated people of this country step out onto the world stage, they should say a few things in the local languages of this country. If there is the need to say a proverb, it should be said in the native language and then for the understanding of the audience, it should be translated into whatever foreign language that the audience speak. For the more we sell our indigenous language through speaking it everywhere we go, we are telling the world that our languages are worth learning.

While African governments are working hard at having common markets, there should be a deliberate plan of implementing educational policies that will ensure that African Universities have courses where one or two indigenous African languages are learnt in addition to French, Portuguese and English.

That way conducting business across the continent of Africa will be facilitated. Business transaction will not be hindered because one cannot speak in a foreign language. It will go a long way to ensure that African markets get expanded easily for the holistic development of our continent.

Every indigenous African language is inherently important to its native speakers; the inability to communicate in a foreign language should not be seen as illiteracy or one being uneducated. It is a matter of language barrier – a barrier that can become a bridge when policies are implemented to promote indigenous languages and at the same time showing the world how beautiful African languages are as they are spoken.

LGBTQI+ debate: Be tolerant of each others views — Akufo-Add...
53 minutes ago