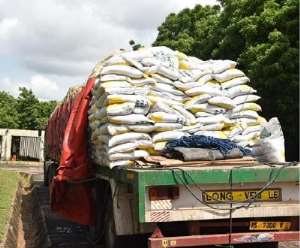 In 2017, President Nana Addo Dankwah Akuffo Addo together with the Minister for Agriculture, Dr. Afriyie Akoto launched the Planting for Food and Jobs so as to create the opportunity to boost food production for our consumption and export.

This demanded that there was the need to support farmers with seeds and fertilizer. In spite of the challenges that bedeviled the farming season that year, it was reported that there was bumper harvest and the excess was exported to our neighbours.

Unfortunately, there is one thing that seeks to destroy the plans of achieving food sufficiency for ourselves and create jobs as well. Tons of fertilizer that were procured and subsidised for the use of farmers are finding their way to Burkina Faso as well as Togo.

Every now and then, there is a media report of trucks loaded with fertilizers impounded either in Upper East or Upper West or some other part of the country. The whole matter is no longer at ease. Unfortunately, the only report that is carried is the impounding of the trucks; the owners of the trucks have never been identified. The owners of the fertilizers have equally not been identified. The matter as it stands does not give cause for optimism neither does it show glimmers of the hope that the saboteurs will be arrested and then the illegal act will be stopped.

The crux of the matter is, which entity takes delivery of the fertilizers from the national level? Who are those in charge of those entities? Are they party members or executives of the ruling party? Are they individuals who are just interested in sabotaging the government so as to discredit the government? Are they public servants in the Ministry of Agriculture at the regional and district levels of the country? Where do the impounded vehicles as well as the bags of fertilizer go? There are more questions than answers.

One does not need to look far to begin finding out the clues. For it is said that the vegetable eater is behind the vegetable leaves. In a media report carried on myjoyonline.com, “Look within gov’t for fertilizer smugglers – Peasant farmers” peasant farmers at a press conference called on the President to look within his government for those involved in smuggling the fertilizers that are meant for peasant farmers. It is more of the proverbial insect whose hiding place is in its host’s cloth.

The reason most state sponsored projects have failed is, the front line implementers have at one point in time being complicit in sabotaging the project. It is worthy to note before the policy was implemented this should have been anticipated. There was at least the need to have foreseen that there will be some nation wreckers who would definitely try to be greed.

Earlier this year, it was reported that some form of a technology will be used to reduce the smuggling of the bags of fertilizers to Burkina Faso and Togo. The story hasn’t changed at all. The act is still going on abated and with impunity. While the President and his appointees take the opportunity to sing praises of the policy of Planting for Food and Jobs, it is worthy to begin to marshal some other strategies to get those behind the act. Again, it is important to note that those who are involved in the smuggling are not just any group of persons, but people who may be powerful and influential. But for their power and influence how do they get access to bags of fertilizers to smuggle.

The praises of this policy have been sang too loudly to allow the smugglers to sabotage it. There is the need to put action into reality so as to arrest the faceless people behind derailing the development of this country.