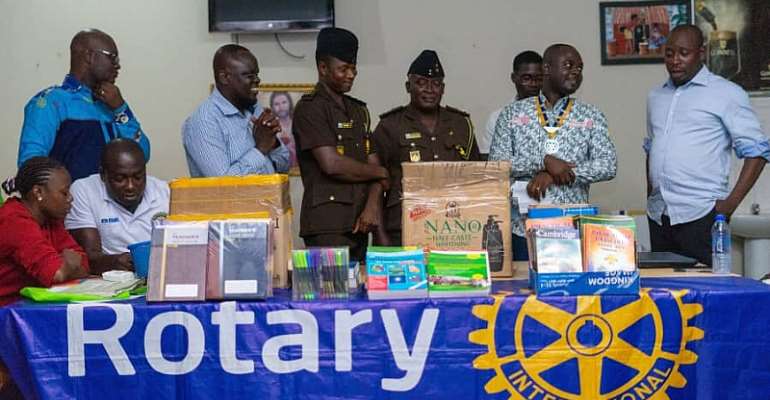 The Sunyani East Rotary Club has donated some learning materials to the Sunyani Central Prisons to help inmates under the Inmate Education Programme.

This was supported by their partners from the Rotary clubs in Nanaimo in Canada.

He admonished the prisons authorities, to put the books to good use and make it beneficial to the inmates.

The club further pledged to support the prisons with four Kent weaving looms.

DSP Francis Nsor, the officer in charge of the Inmate Education Programme on behalf of the Prisons Commander commended the gesture by the Rotary Club of Sunyani East.

He added that, Rotary has been their biggest partner in their constitutional mandate in reforming inmates. He noted the donation will go a long way to aid the education of the inmates who find themselves in incarceration.

He disclosed the gesture would go a long way to improve the WASSCE results of the inmates.

The Public Relations Officer of the Sunyani Central Prisons, DSP Johannes Nartey also praised Rotary Club of Sunyani East for their continuous support to the prisons. He further called on the club to support them with Kente weaving looms to help set up the inmates who are about finishing serving their prison terms.

According to DSP Nartey, there are four inmates who are currently in the Kente weaving vocation and are soon due for release. The request is to help set them up and make them useful to their communities once again.