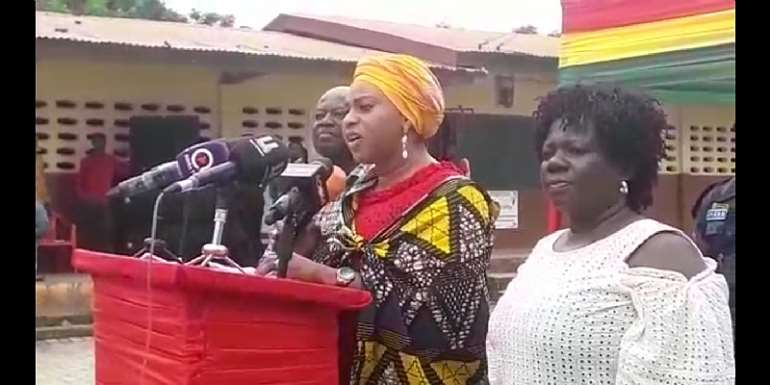 Member of Parliament(MP) for Dome Kwabenya Honourable Sarah Adwoa Safo has cut sod for the construction of a new six unit classroom block and two unit kindergarten block for the St Dominic Catholic School at Taifa in the Ga East Municipal Assembly under Dome Kwabenya constituency of the Greater Accra Region.

According to her, the construction of the six unit classroom block and the two unit kindergarten block are vital for conducive learning for the school children.

Addressing the gathering, She said "Good infrastructure development in the educational sector of a nation initiate better teaching and learning in the school. A nation future depends on it youth so there is a need to invest in them and since they need to be educated in an enabling environment with good facilities so they can become great leaders of the nation."

Hon Adwoa Safo emphasized that President Akufo-Addo has come up with policies for quality form of education for all Ghanaians adding that he is fulfilling his promise of the free educational scheme.

"The contractor for the project will take about five month to complete and edge the contractors to show commitment of the cost GH 785,834.20 six classroom block and GH 290,958.97 two kindergarten block and is funded by the Ghana Education Trust Fund for their support," she noted.

The Municipal Chief Executive (MCE) for Ga East Municipal Assembly, Janet Tulasi Mensah was full of praise for the MP for the project.

" I am overwhelmed at how and she lobbied vigorously for the project which when completed will ease overcrowding in the classroom," she added.

The Member of Parliament who also doubles as the Deputy Majority Leader of Parliament and Minister of State in charge of Government Procurement challenged the pupils to study as she promised to sponsor the first 5 students who excel in their WASSCE in Tertiary from the 'Adoa Safo Foundation'.