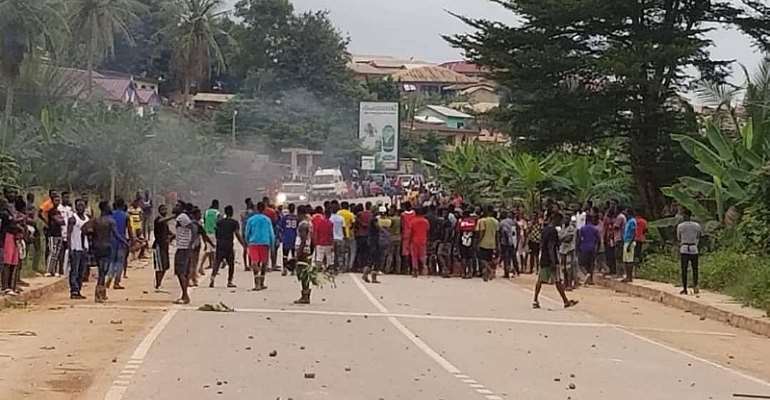 Some residents of Ayanfuri in the Upper Denkyira West District in the Ashanti Region on Friday attacked some members of Operation Vanguard in protest over the arrest of suspected illegal miner.

A report by the Operation Vanguard said at about 8am, while the team was on an operation near the Perseus Mines in the area, a local man in possession of a gold detecting machine close to the concession's dumpsite and suspected to be an illegal miner was arrested and handed over to police for further action.

But not long after, the patrol team got information that some locals were massing up with intentions to attack the Operation Vanguard team over the arrest.

When the team arrived at the location, in an attempt to disperse the crowd, they witnessed some youth in the town having set up roadblocks and burning tires, agitating.

In the ensuing chaos, the team fired warning shots and apprehended a local man.

This resulted in the rioters causing extensive damage to one of the Operation Vanguard Trooper vehicles.

“Vanguard personnel who were called to reinforce the initial patrol team were attacked by the rioters when they got to the Y-Junction. Some of the locals advanced toward the reinforcement team wielding cutlasses and other weapons without regard for the warning shots the team fired. In their defense, the team fired two shots at the protesters from about a meter away injuring one of them. The casualty, who was shot in the leg was evacuated to the Perseus Mines Clinic for treatment. A second unconfirmed casualty was carried off by the rioters. However, the individual's current state is unknown,” Operation Vanguard’s report said.

Meanwhile, the team has issued a caution that some Nigerians and other nationals are involved in inciting local youth in the area to riot and cause chaos.